It is one of the four primary basic tissues from which the body is made. It consists of two types of cells; neurons (nerve cells) and neuroglia (supporting cells).

The neuron or nerve cell is the structural and functional unit of the nervous tissue.

Histological structure of the neuron:

It is composed of a cell body called the perikaryon or the soma and cull processes that include axon and dendrites.

1- The cell body: it is the part of the neuron containing the nucleus. It is composed  of:

A. Cytoplasm: It contains organelles and inclusion, particularly:

B. Nucleus: neuron is metabolically-active and hence the nucleus is euchromatic. 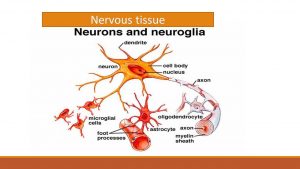 Classification of the neurons

Functionally, neurons could be:

Morphologically, neurons could be classified according to the number of their processes into:

General organization of the nervous system

In the nervous system the cell bodies and their processes have the following distribution:

A nerve fiber consists of an axon enveloped by a special sheath. Nerve fibers exhibit differences in their enveloping sheaths, related to whether the fibers are part of the central or peripheral nervous system.

I. In peripheral nervous system:

A. Myelinated nerve fibers in PNS: They are axons of large diameters and are enveloped by a myelin sheath and neurilemmal sheath.

I. The myelin sheath: It is a lipid-rich coat that covers the axon. It is formed by wrapping of Schwann cell around the axon. It is interrupted at equal intervals by constrictions (nodes of Ranvier) where the axon can emit its collaterals. The segment between two nodes is the internodal segment and is occupied by a single Schwann cell. At each node, the outer Schwann cell sheath meets the axon providing it with nutrients, as it is not covered by myelin.

Function: Insulation and protection of the nerve fiber as well as fast conduction of nerve impulse

II. Schwann cell sheath (neurilemmal sheath or neurilemma): It consists of the Schwann cells (cytoplasm and nucleus) that form an outer thin sleeve around the myelin of a nerve fiber.

Function: Formation of myelin, nutrition of the axon (at nodes of Ranvier) as well as regeneration of the nerve fiber after injury.

B- Unmyelinated nerve fibers in PNS: Axons are usually small in diameters; they are enveloped by Schwann cell sheath (neurilemma) only. A single Schwann cell envelops multiple segments of different axons.

Myelinated with myelin sheath (formed by neuroglia cells of the CNS, oligodendrocytes). They are present in white matter and the optic nerve. Naked nerve fibers are present in grey matter.

Myelinated nerve fibers in the CNS: Nerve fibers are enveloped by myelin sheath without neurilemma. Here, oligodendrocytes differ from Schwann cells, which are absent in CNS in that multiple processes of single oligodendrocyte can envelop segments of several nearby axons. The cell body of the oligodendrocyte will be at some distance from the axons it myelinates.