The attenuation reflex partially protects the cochlea from the damaging stapes vibrations caused by a very loud sound. It provides a partial reduction of the intensity of only 40 dB. It decreases the person’s sensitivity to his own speech. (Collateral fibers are transmitted to these muscles during speech).

It minimizes the transmission of low-frequency sounds in a loud environment. This usually removes a major share of the background noise and allows the person to concentrate on sounds above 1000 Hz where most of the pertinent information in voice communication is transmitted.

Also, efferent fibers from olivary neurons (which are sensitive to low-frequency sounds) passes to the cochlea can decrease cochlear response to a background noise by triggering hyperpolarization of outer hair cells through an acetylcholine mediated pathway (masking effect). This effect raises the auditory threshold.

Functions of the cochlea

1. The organ of the Corti (the cochlear mechano-receptive organ) is located on the basilar membrane, It contains the mechanically-sensitive hair cells, which are the auditory receptors, This organ extends from the apex to the base of the cochlea and consequently has a spiral shape. 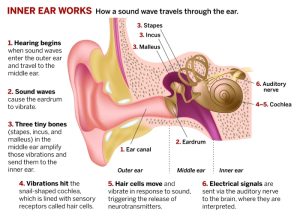 There are 20,000 outer hair cells and 3500 inner hair cells in the human cochlea. Covering the rows of hair cells is a tectorial membrane in which their tips or the stereocilia are embedded. Neurons of the spiral ganglion within the modiolus send their processes that arborize at the bases of hair cells; these fibers transmit electrical changes generated by hair cells to the afferent ascending auditory nerve.

2. Stria vascularis: It is a highly vascular structure surrounding the scala media. Cells of the stria vascularis have a high concentration of Na+-K+  ATPase. It continuously secretes K+ in the endolymph. This accounts for the fact that the scala media is positive by 80 millivolts (mv) relative to the scala vestibuli or scala tympani at rest.

This difference is called endocochlear potential. It serves as a major driving force for signal transduction, The intracellular recording reveals that the hair cells have a resting potential of approximately – 40 to – 60 mv, Therefore, the net potential difference across the hair cell border is 120 to 140 mv, The high electrical potential at the tips of the stereocilia increases their ability to respond to the slightest sound; they are highly excitable.

3. The basilar membrane: It contains about 25000 stiff elastic basilar fibers. Their lengths increase progressively from the base towards the apex of the cochlea. The diameter of the fibers, on the other hand, decreases from the base towards the apex. As a result, the thick, short fibers near the oval window will vibrate with high-frequency sounds, while the long thin fibers near the apex will vibrate with sounds of low frequency.

Physiological functions of the cochlea

Transmission of sound waves in the cochlea

The movement of the footplate of the stapes sets up a series of traveling waves in the perilymph of the scala vestibuli, When the wave moves up the cochlea, its height increases to a maximum and then it drops off rapidly.

The bony walls of the scala vestibuli are rigid, but the Reissner’s membrane is flexible, The displacements of the fluid in the scala tympani are dissipated into the air at the round window, Therefore, the sound produces a distortion of the basilar membrane, and the site at which this distortion is maximal is determined by the frequency of the sound waves.

The hair cells transform the mechanical forces of sound (cochlear fluid vibration) into electrical impulses of hearing (action potentials propagating auditory messages to the cerebral cortex), An upward mechanical displacement of the basilar membrane creates a shearing force of stereocilia that results in the influx of K+ through specific cation channels in their membranes, thus the hair cells are depolarized.

Depolarization of hair cells leads to the influx of Ca2+ through the voltage-sensitive Ca2+ channels in their membranes. The influx of Ca2+ triggers the release of the transmitter (probably glutamate) that in turn elicits action potential in the afferent nerve fibers then up through auditory nuclei to the auditory cortex where is perceived by the brain as sound sensation.

The auditory nerve (myelinated & unmyelinated fibers) courses through the internal auditory meatus to enter the brainstem. Fibers enter the dorsal and ventral cochlear nuclei (the second-order neurons in the upper part of the medulla) where all fibers synapse and most of the second-order neurons fibers pass to the opposite side to reach the superior olivary nucleus. A few second-order fibers pass to the superior olivary nucleus of the same side.

From the superior olivary nucleus fibers constitute the lateral lemniscus which ends in the inferior colliculus of the midbrain. The fibers then reach the medial geniculate body of the thalamus from which they terminate in the primary auditory cortex (Brodmann’s areas 41 and 42 in the superior gyrus of the temporal lobe.

From the primary auditory cortex, the fibers then pass to the auditory association area (area 22) then to Wernicke’s area. Impulses from either ear are transmitted through the auditory pathways of both sides of the brainstem, with more projection along the contralateral pathway.

Many collateral branches are given off to the reticular activating system of the brainstem, The tonotopic organization present in the organ of Corti is preserved within the cochlear nuclei, the inferior colliculus, and the primary auditory area.

Functions of specific parts of the auditory pathway

1. Function of the dorsal cochlear nucleus

Its neurons analyze sound frequencies (lateral neurons receive low-frequency sound waves, medial neurons for high-frequency waves) as arranged on the basilar membrane. This spatial organization continues all the way up to the cerebral cortex. Cochlear nuclei of both sides are interconnected.

Its function is the determination of sound direction in space through the difference in amplitude and time lag of signals arriving to the two ears.

Connection to the reticular formation leads to brain arousal. Fibers descend from the olivary nucleus through the auditory nerve to innervate and decrease the cochlear amplifier (masking effect) by triggering hyperpolarization of the outer hair cells; this decreases the auditory response to background noises that partially prevents acoustic trauma Also this pathway can discriminate transient sounds from background noise.

4. Functions of the inferior colliculus

It is a center for auditory reflexes (audio-spinal reflexes). It processes information received from previous nuclei then sends fibers to the geniculate body of the thalamus.

It plays a role in processing of complex vocal communications as human speech.

Interpretation of the meaning of the sound heard: it plays an important role in speech perception due to its connection with the language reception center; Wernicke’s area. It associates sound information with information coming from other cortical sensory areas (as the visual cortex). Auditory information from subcortical structures also projects to the amygdala which is a part of the limbic system so emotional responses could be evoked by sounds.

The place principle of pitch analysis

It states that: Vibration of fibers of the basilar membrane depends upon their length and diameter, i.e. the short thick fibers at the base are maximally activated by the high-frequency sounds and the long thin fibers at the apex are maximally activated by the low-frequency sounds and the fibers between the apex and base respond to intermediate frequencies so each pitch (or frequency) would cause a vibration of its own particular “place” on the basilar membrane.

This spatial arrangement continues all the way up the brainstem to the cerebral cortex. So specific neurons are activated by specific sound frequencies i.e. there is no mixing of fibers, each area has its own fibers in the nerve pathway up to the auditory cortex.

Determination of loudness of sound

It is determined by the degree of displacement of the basilar membrane. Thus increasing the amplitude stimulates the nerve endings at more rapid rates. More and more of the receptors (hair cells) become stimulated.

In the horizontal plane (Require bilateral hearing). It is a function of the superior olivary nucleus and the primary auditory cortex. They detect the time lag between the entry of sound into one ear and its entry into the opposite ear through the presence of time lag neurons. They also detect the difference in the intensity of sound between the two ears.