The cochlea is a cone-shaped spiral bony canal, 3.5 cm long that makes 2¾ turns around a bony axis, the modiolus which houses the spiral ganglion of the cochlear nerve. In histological sections, the lumen of the bony cochlear canal is divided into three spiral chambers or scalae. The scala vestibuli above, scala tympani below, and in between is the scala media which is triangular in cross-section.

The scala media (the membranous cochlear duct) contains the spiral organ of the Corti. It is the sensory organ of hearing which extends along the entire length of the cochlea from the apex to the base.

The membranous cochlear duct contains endolymph and is surrounded by the perilymph present in scala vestibuli and scala tympani. The cochlear duct is continuous with the saccule of the bony vestibule and ends at the apex of the cochlea. 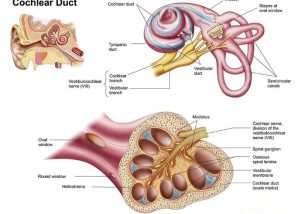 Boundaries of the cochlear duct (the scala media)

The lateral boundary of the cochlear duct is formed by the stria vascularis which is a vascularized cuboidal epithelium covering the periosteum. It is responsible for the production of the endolymph.

Histological structure of organ of Corti

It is composed of the following:

There are several types of supporting cells, resting on the basilar membrane and contain bundles of microtubules and microfilaments. They include:

II. Inner and outer hair cells: these are specialized neuroepithelial cells which include:

Hair cells do not directly rest on the basilar membrane, but their rounded bases lie in the cup-shaped recesses of the corresponding phalangeal cells. The basal aspects of hair cells synapse with the afferent fibers of the cochlear division of VIll nerve.

It is a gelatinous mass containing numerous collagen fibrils, It is attached medially to the modiolus, while its lateral free edge projects to cover the organ of Corti, The apical ends of the phalangeal cells are tightly bound to one another and to that of hair cells by the tight junction. These junctions form the tough, membrane-like reticular lamina. The stereocilia of hair cells pierce the reticular lamina and become embedded into the under-surface of the tectorial membrane.

Hearing is the neural perception of sound energy.

Sound is characterized by its pitch (frequency), intensity (loudness=volume), and timbre (quality).

The intensity of sound (loudness or volume): Loudness is measured in decibels (dB). Sounds of intensity greater than 130 dB can permanently damage the sensitive sensory apparatus at the base of cochlea. The minimal sound pressure detected by the human ear (the threshold value) is 0.000204 dynes/cm². It is the zero (0) decibel.

The timbre or quality: The timbre, or quality of sound, depends on its overtones, which are additional frequencies superimposed on the fundamental pitch or tone.

The pinna acts as a sound collector. The external auditory canal affords protection against physical trauma; it can vibrate when wavelength of sound is 4 times the length of the tube. The external ear resonance adds 15-20 dB to the sound pressure at the tympanic membrane. Sound localization in space: the external ear plays a role in sound localization by changes in pressure on the tympanic membrane.

Function of the tympanic membrane

The tympanic membrane moves in and out in response to pressure changes produced by sound waves on its external surface so it acts as a resonator, the physiological surface area is 55 mm².

Functions of the middle ear

1. Conduction of sound from the tympanic membrane to the cochlea

a. Amplification of sound intensity: two mechanical devices are built in the middle ear that amplifies sound pressure that arrives at the oval window. These are:

c. Sound protection of the round window: bulging of the round window towards the middle ear due to pressure energy of sound in scala tympani, it serves as a pressure relief hole that prevents overlap between the successive waves, so it allows discrimination of sound waves inside the cochlea.

Tympanic muscle reflexes (attenuation reflex): The stapedius and tensor tympani muscles act directly upon the ossicular chain. They contract reflexly in response to sounds of high intensity (above 80 dB) and low frequency below 1 KHz = 1000 cycles/second). The contraction of the two muscles acts as two forces leading to the entire rigidity of the ossicular chain. that greatly reducing the transmission of loud sounds.

This is called the attenuation reflex. It starts at the cochlea (the stimulus is the high intensity and low-frequency sound), then through the cochlear nuclei, superior olivary nucleus, and inferior colliculus (the center of the reflex) to the motor nuclei of the V and VIl cranial nerves to the tensor tympani and stapedius muscles respectively. The reflex is consensual whether the sound stimulus is applied to one or both ears. The reflex occurs after a latent period of 40-80 milliseconds.