Muscle tissue consists of muscle fibers, It is formed during embryonic development through a process known as myogenesis, and it is responsible for movements in our body. Muscular tissues consist of fibers of muscle cells connected together in sheets and fibers, and they are known as muscles and control the movements of organisms as well as many other contractile functions.

Muscular tissue is one of the primary tissues of the body. It is specialized for contraction and to a lesser degree for conductivity. Muscle tissue is connected to the same nerve bundles, The nerve impulse traveling from the brain or another outside signal tells the muscle to contract, The nerve impulse is transferred to the nerve cells in the muscle tissue, and the entire muscle contracts.

Each type of muscles has its own particular characteristics, but all the types have common features which are: 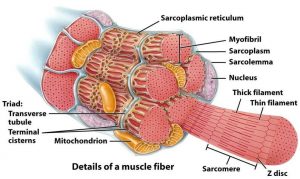 In longitudinal sections: These are long cylindrical cells (fibers) arranged parallel to each other. Each skeletal muscle fiber is multinucleated; the nuclei are elongated, oval and are peripherally situated lying under the sarcolemma. The sarcoplasm is eosinophilic as it is filled with numerous longitudinally-oriented myofibrils. At relatively high magnification, the muscle fibers show a characteristic transverse striated appearance because:

In cross-sections: Each muscle fiber appears polyhedral in shape. According to the level of cut, some muscle fibers show no nuclei while others show one or more peripheral nuclei. The myofibrils appear as coarsely granular areas separated from each other by narrow regions of sarcoplasm.

On examination with the EM, the study of the internal structure of the muscle fiber revealed the abundance of myofibrils and mitochondria and sarcoplasmic reticulum. The sarcoplasm fills all the interstices between the myofibrils and is most abundant at the poles of the nuclei.

The myofibrils are made up of smaller longitudinal structures known as myofilaments. Two principal types of myofilaments have been identified; thick and thin.

Organization of myofilaments in the sarcomere:

According to the arrangement of thin and thick myofilaments:

The thin myofilament is formed of the following:

The thick myofilament is composed of about 350 myosin molecules. Each myosin molecule has a long tail formed of two coiled polypeptides chains and two globular heads; each has two binding sites, one for ATP and one for actin.

Functional states of sarcomere during contraction

Contraction occurs due to the sliding of thin myofilaments over thick myofilaments. Thus during muscular contraction:

There is no change in the length of:

There is shortening in the length of:

These are tubular invaginations of the sarcolemma that penetrate deep into the interior of the muscle fiber. They branch to encircle each myofibril transversely at the junction between the A and I bands. According to this arrangement, each sarcomere is encircled by two T tubules.

Function: T tubules conduct a wave of depolarization simultaneously to all the myofibrils of a muscle fiber so that they contract all that at the same time.