Mechanism of action of the macula

The hair cells of the macula act as stretch receptors that are stimulated by a stretch. They are stretched when their kinocilia become bent secondary to the displacement of the otoliths (otoconia). Once the hair cells become stretched they become depolarized and discharge impulses along vestibular nerve endings.

Functions of the utricle and saccule 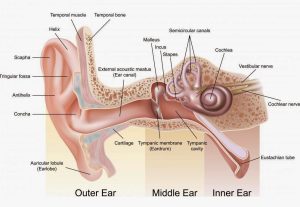 1. Orientation of the head position relative to gravity

If the head is in a central position, the hair cells in both maculae are exposed to uniform stretch resulting in equal discharge from maculae on both sides. This discharge on reaching the cerebral cortex will give the sense of the erect position of the head.

Sudden forward horizontal movement leads to a sense of back fall. This can be explained by that the otoconia become displaced backward due to their inertia stretching all the hair cells of both maculae, leading to an increase in the discharge of vestibular nerve that reaches the cortex giving the sense of back fall. Corrective movements are initiated by the cortex to support the body by leaning forward.

Mechanism of action of the crista ampullaris

Functions of the semicircular canals

Mode of action of SCCs during rotation

At rest, both cupulae of the right and left horizontal SCCs are central with equal bilateral discharge, giving no sense of rotation. When the individual starts to rotate in a horizontal plane from left to right, the endolymph lags behind the moving canals due to its inertia.

At the stop of rotation, the endolymph continues to move from left to right by its momentum leading to stimulation of the left crista with inhibition of the right one. The unequal discharge, in this case, will give a sense of counter-rotation (the individual feels that he is rotating from right to left). This condition is called vertigo which is a false sense of counter-rotation in the absence of real rotation.

Within 30 seconds after rotation stops the endolymph stops moving and the cupula resumes their resting position by their elasticity, so their balanced discharge returns and the feeling of counter-rotation stops.

SCCs are active only at the beginning and end of the rotation or if the rate or direction of rotation is changed. Each SSC becomes activated when rotation is at its plane.

Stimulants of the semicircular canals

Central connections of the vestibular apparatus

Effects of stimulation of the semicircular canals

When the head turns to the right; the right crista fires impulses to the right vestibular nucleus, which in turn discharges to the right oculomotor and left abducent nuclei through the medial longitudinal bundle causing slow movement of both eyes opposite to the direction of rotation.