Infinix Hot X507 is pretty much similar to that of Infinix Zero, It is a dual-sim android device, and it operates on both 2G and 3G networks, Infinix Hot X507 has a screen of 5.0 inches wide and it supports a 16GB internal memory which is expandable.

Infinix Hot X507 multitasking is good and fast, The camera quality is good, Infinix Hot X507 has fully partitioned internal storage, It has very smooth and fluid performance, It has FM recording, and it has decent camera despite the cheap price. 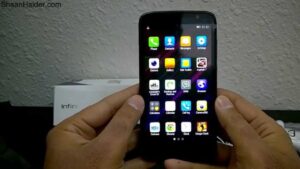 Infinix Hot X507 is fast, It runs on a 1GB RAM with a 1.3 GHz Quad-core processor, It isn’t slow in operation and gaming is sweet with its 5.0-inch screen size, Infinix Hot X507 battery life is moderate, It comes with a battery capacity of 2000mAh.

Infinix Hot X507 is made of plastic all round, It has many colours such as  Yellow, Red Black, White, and Blue (Cyan), and they glow in the dark, At the top is the charging port and 3.5mm earphone jack, The right-hand side there are features of the power and volume buttons.

The display of this device is just 854 x 480 pixels, From calculations, the ppi is supposed to be about 195ppi but Infinix states it as 240ppi, Infinix Hot X507 has a 5MP rear camera, The LED flash performs well and lights up dark scenes favorably, The camera has a feature called smart gesture.

The music playback here is decent, The video playback is okay, the front-facing camera here is better than on Infinix Zero, Images here are clearer and sharper, It has the same problem of covering only a narrow range, three heads can’t fit comfortably into a selfie.

Infinix Hot X507 has a 1.3GHz quad-core processor and 1GB of RAM  which has limitations depending on the size of the app in use, The graphics are quite poor when operating certain apps, The front camera doesn’t cover a wide range, and it has average battery life.

Infinix Hot X507 loudspeaker volume is not impressive, The loudspeaker is placed on the back of the device, Some pre-installed games are demo, The flashlight as the torchlight is not great.

Infinix Hot X507 has no light on soft function keys, Infinix hot x507 uses soft function keys and, So, It is difficult to navigate through the device when there is not enough light, It has no lED notification light.