Robotics or artificial intelligence (AI) are used in manufacturing, in search, in rescue missions & in the military, They are used in factories all over the world and many people recently have lost their jobs as Robots have become more efficient and precise than humans.

Robotics is a sector of science and engineering dedicated to the design, construction, and use of mechanical robots, Robots can replicate or substitute for human actions. A robot is a programmable machine that can complete a task, while the term robotics describes the field of study focused on developing robots and automation, Each robot has a different level of autonomy.

People should know the importance of robots to help them to determine when to use and when to not use robots, Robots can go to the planets, They can be used to explore space, They can spy on people in ways the people can’t move and from views, the humans can’t reach.

Robots can go far down into unknown places where humans would be crushed, They can give us information that the humans can’t get, They can work at places 24/7 without any salary and food, Plus they don’t get bored.

Robots can perform tasks faster than humans and much more consistently and accurately, They become more common each and every day, robotic pets can help patients with depression and they keep them active. 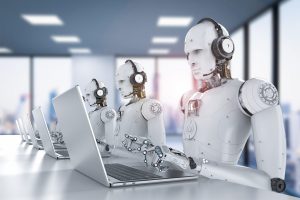 Most robots are automatic so, they can move without any human interference, They can entertain us and they can help us in certain tasks, You can send them to a dangerous environment such as the deep sea or the war zones.

You can use robots to produce products in the factories such as assembling cars, They can also be used to build the parts for many products such as plane parts, car parts & construction supplies.

Robots do anything which we need to be precise & accurate, New jobs are created because people have to fix and design robots, Robots can work without sleep, So, they can work 24/7/365.

The overall cost of the product reduces as the work is done by robotic machines, The product is made through machines, assembled, packaged, and distributed from one department to another, So, this way the overhead cost, including the maintenance cost, is reduced to a lesser level.

Robots can endure a hostile environment of interplanetary space, They are made so that the planetary atmospheres do not affect their physical state & performance, They can replace human beings in many areas of work, They can shoulder greater responsibilities and they can be programmed to manage themselves.

Robots can be used in carrying out repetitive & time-consuming tasks efficiently, They are used to do dangerous tasks, They can adjust their parameters like their speed & time, They can act quickly, unaffected by the factors that affect humans.

Robots do not require to sleep or take breaks, They are able to function without stopping, When employed to carry out dangerous tasks, the risk to human health & safety is reduced, They can work a long time without service or maintenance and they can be more productive than the people.

Robots can not tremble or shake as human hands do, They can have much smaller & versatile moving parts than people, They have performed medical surgeries because they can be faster and more precise than people.

Robots are designed to work in harsh environments like in space, without the air, underwater & in fire, They can be used instead of people when human safety is a concern, They can come in any size, Whatever size is needed for any task can be created.

Robots can do the jobs that people are unwilling to do, many robotic probes have been sent throughout the solar system to never return back to Earth, They can be stronger than the people, Robots in warfare eliminate putting more people at risk.

Teleoperated robots use a wireless network to enable human control from a safe distance, They work in extreme geographical conditions, weather, and circumstances. such as the human-controlled submarines used to fix underwater pipe leaks during the BP oil spill or drones used to detect landmines on a battlefield.

Bots are computer programs, that carry out tasks autonomously such as chatbots. Chatbots can carry out simple conversations, often in a customer service setting. Spam Bots can collect email addresses and send spam mail.

Robots need a supply of power, The people can lose jobs in factories, They need maintenance to keep them running, It costs a lot of money to make or buy robots, and the software and the equipment that you need to use with the robot cost much money.

Robots cost much money in maintenance & repair, The programs need to be updated to suit the changing requirements, the machines need to be made smarter, In case of breakdown, the cost of repair may be very high, The procedures to restore lost code or data may be time-consuming & costly.

Robots can store large amounts of data but the storage, access, and retrieval is not as effective as the human brain, They can perform repetitive tasks for a long time but they do not get better with experience such as humans do.

Robots are not able to act any different from what they are programmed to do, With the heavy application of robots, humans may become overly dependent on the machines, losing their mental capacities, If the control of robots goes into the wrong hands, Robots may cause destruction.

Robots are not intelligent or sentient, They can never improve the results of their jobs outside of their predefined programming, They do not think, They do not have emotions or conscience, This limits how the robots can help & interact with people.

Humans fear robots, Robots inspire two types of fear: firstly, that they might take over our jobs, and secondly, that they could take over the world, Robots will steal our jobs, Robots have the effect of increasing productivity rather than eliminating jobs.

Robotics become increasingly present in our everyday life, with household robots, medical, industrial, on production lines, not to mention airports, banks, and hotels, So, Robots may dominate the human species. Robots can operate on the basis of information fed to them through a chip, when one thing goes wrong the entire company bears a loss.

The robot can save time, but it can also result in a lag, It is a machine so you can’t expect too much from them, If the robot has malfunctioned, you need extra time to fix it, which would require reprogramming, If robots would do all the work, and the humans will just sit and monitor them, health hazards will increase rapidly, Obesity will be on top of the list and less labour at workplaces.

As robots start playing a major role in our daily lives, people become dependent on robots which may result in the introduction of more features in robots to make our life easier, This can harm the human lifestyle with fewer interactions and movements, When any failures or breaks take place in the automated system due to technical fault, the entire workflow will be impacted in absence of any backup plan.