What is the difference between iPhone 5s and iPhone 6?

The design of iPhone 6 is stunning as iPhone 6 is more smooth and sleek than iPhone 5S which has full aluminum chassis and rounded edges, and if you prefer a smaller and lighter smartphone, iPhone 5S is preferable.

iPhone 5S offers a better experience when playing the games, watching the movies and viewing the photographs,  but some users have found it is difficult to use with one hand.

iPhone 6 is bigger than the iPhone 5, and iPhone 6 is thinner than iPhone 5, And iPhone 6 also has a higher contrast ratio and dual-domain pixels that will help improve the viewing angles of the display.

The colour options for both the iPhone 5s and iPhone 6 are Space Grey,  Silver and Gold, Both of them have the same 8mp camera, but iPhone 6 gives many details in all environments over iPhone 5.

iPhone 5s is already so powerful that a boost won’t be obvious to the general iPhone user, but the iPhone 6 scored remarkably well in the benchmark tests. 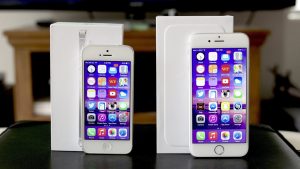 There’s also a new feature in the iPhone 6 called VoLTE (voice over LTE) which should help you make better quality calls, but you’ll only get that feature on EE in the UK, That there’s the matter of storage, iPhone 5s is now only available in 16GB and 32GB options, but a 64GB model was available before the arrival of iPhone 6.

The front-facing camera on the iPhone 6 has a better aperture f / 2.2 like the rear-facing camera, It’s also designed to be better at capturing the photos in low-light, and it has Burst mode as well as improved face detection for those ever-popular selfies.

iPhone 5 is designed as a world lightest smartphone in high configuration mobile in the world market at that time period, iPhone 5s has a powerful A7 processor, and you’ve guessed it, the iPhone 6 has a new A8 processor, It uses a 20nm process and delivers 25 percent more CPU power and 50 percent better efficiency than the A7.

iPhone 6 has a brand-new design, It’s more rounded than the iPhone 5S, it has new and repositioned physical buttons (the lock button is now on the side of the iPhone) it’s thinner, most obviously, and it is bigger.