Applications on the pressure at a point (Connected vessels, U-shaped tube & Mercuric barometer)

Since the internal pressure pushes it outwards , this can be compensated by adjusting the amount of air in the eustachian tube by swallowing and chewing gum to reduce the pressure on the ear drum .

Applications on the pressure

There are many applications on the pressure at a point inside the liquid such as Connected vessels , U-shaped tube , Mercuric barometer and Manometer .

Put a suitable amount of water in the U-shaped tube so that the level of water is the same in both sides , Pour oil gently in one of the sides so that a separating surface is formed between oil and water as they are immiscible liquids , Measure the height of water ( hw ) and that of oil ( ho ) above the separating surface when they are in equilibrium .

Density of oil can be determined as follows :

Density of oil can be determined using the relation by knowing the density of water :

The height of a liquid in the tube is inversely proportional to its density  h ∝ 1/ρ , The radius of the tube or the cross-sectional area of two branches does not affect on the height of the two liquids in the branches , we can apply the following relation ho ρo  = hw ρw , in U-shaped tube with different diameter .

In case of two miscible liquids , they can be separated by a third liquid that is immiscible with each of them like mercury which can separate between water and alcohol .

In case of the balance in U-shaped tube : 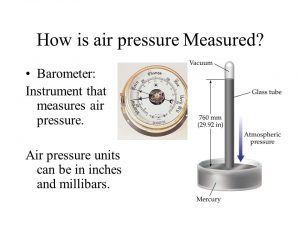 A scientist named Torricelli invented the mercuric barometer to measure the atmospheric pressure , A glass tube of length 1 meter and opened at one of its ends is completely filled with mercury then turned upside down in a tank of mercury .

The pressure at all points in the same horizontal plane in a homogeneous liquid is the same , the atmospheric pressure is equivalent to the weight of a column of mercury whose height is 0.76 m and cross-sectional area 1 m² at 0° C at sea level .

The atmospheric pressure ( Pa ) is the weight of air column whose base is the unit area and its height extends from the sea level to the top of the atmosphere , or it is the air pressure at sea level which is equivalent to the pressure due to weight of mercury column of height 0.76 m and of base area 1 m² at 0° C .

Mercury is used as a barometric substance because the density of mercury is high , so , its height becomes suitable to the length of the barometer tube where : ( h ∝ 1/ρ ) , Also no pressure in Torricelli vacuum because no mercury vapor in normal temperature .

The reading of the mercuric barometer depends on the atmospheric pressure acting on the surface of mercury in the mercury tank which changes by changing temperature and height from the sea level .

Uses of the mercuric barometer

Determination of the atmospheric pressure .

Determination of the height of a mountain or a building .

Determination of the density of air .

Determination of the atmospheric pressure

Atmospheric pressure = Pressure at point ( A )

By knowing density of air , the height of mountain can be determined and vice versa . 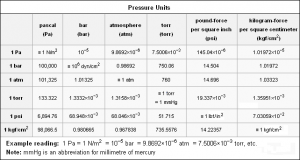 The atmospheric pressure can be measured by different units such as cm Hg , atm , Bar , Pascal , Torr .