Optical pumping process is the excitation of atoms of the active material to generate laser by the optical energy, Helium and neon gases are suitable for the production of gases laser due to the values of their excited metastable states which are very close to each other.

Main components of a laser

Despite the variation in the sizes and types of laser devices, they consist of three common elements, They are Active medium, Energy sources & Resonant cavity. 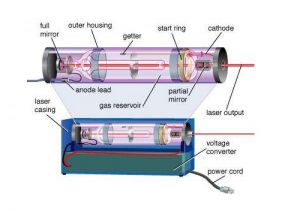 Main components of a laser

It is the active material that produces the laser ray, It can be:

From the previous, we conclude that there are different types of laser:

Construction of He – Ne laser:

Metastable energy level is the energy level which is characterized by long lifetime relatively (10−3 s), It is necessary for laser sources during operation, the active medium reaches the inverse population state which it isn’t required in ordinary light sources, because the base of laser action is the existence of a large number of atoms in metastable state to be the stimulated emission is the dominant emission.