Matter can be found in nature in one of three states which are solid , liquid , gas , Solid materials ( like wood and glass ) have a definite shape and volume , while liquids and gases ( like water and air ) have no definite shape but they take the shape of their container , so , they are called fluids .

Fluids are the materials which can flow and have indefinite shape , There are two types of fluids :

We will explain in details some of the physical properties characterizing the fluids which are density and pressure .

Density is the mass of unit volume of the substance or the mass of the body divided by its volume , The density of a material is given by the relation : 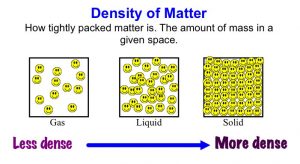 The factors that affect the density

Density differ from material to another because of the difference in :

The relative density of a substance can be determined from the relations :

The density of a material can be determined by knowing its relative density using the following relation :

When a force ( F ) acts on a surface of area ( A ) , pressure ( P ) is produced on this area , The pressure at a point is the average force acting perpendicularly on the unit area surrounding this point .

When the pressure at a point = 500 N/m2, It means that average force acting perpendicularly on the unit area surrounding this point = 500 N .

Factors affecting the pressure at a point :

As the area decreases , the pressure increases , So , needles and pins have sharp tips , Thus , higher pressure is produced , so , they penetrate bodies easily .

Applications on the pressure

The systolic ( contracting ) pressure is the maximum value for the blood pressure when the heart muscle contracts and equals 120 torr for the normal person .

The diastolic ( relaxing ) pressure is the minimum value for the blood pressure when the heart muscle relaxes and equals 80 torr for the normal person .

Measuring the air pressure inside the tires of a car : The tire of a car is filled with air under a suitable high pressure so that the tangent area between the tire and the road is minimum and consequently the friction decreases which in turn decreases the hot temperature of the tire and vice versa .

Pressure due to pointed high heel is greater than that due to elephant’s foot on the ground because the pressure is inversely proportional to the surface area .

Pressure at a point inside a liquid

When a liquid is put in a container , every point inside the liquid is affected by the weight of the liquid column which its height ( h ) and the area of its base ( A ) which causes a pressure at this point .

Pressure at a point inside a liquid is the weight of the liquid column which its base is the unit area surrounding this point and its height is the vertical distance from this point to the surface of the liquid .

When the pressure of a liquid at a point inside it = 2 ×106 N/m2 , It means that the weight of the liquid column which its base is the unit area surrounding this point and its height is the vertical distance between this point and liquid surface = 2 ×106 N .

Deduction of the pressure value at a point inside a liquid

Weight of the liquid column ( Fg ) is determined by the relation :

If the liquid surface is open to air then the total pressure at this point : P = Pa + ρgh , Where Pa is the atmospheric pressure , The pressure on a body at the bottom of a liquid is perpendicular on each point of its surface .

Factors affecting the pressure at a point inside the liquid :

It is clear that as the depth ( h ) increases , the pressure ( P ) increases where P ∝ h , That is why the base of the dam must be thicker than its top to withstand the increase in pressure at the high depth , When the depth of points below the surface is same and so is the density ( ρ ) , the pressures becomes the same where p = ρgh .

Applications on the pressure at a point ( Connected vessels , U-shaped tube & Mercuric barometer )