It is a temporary magnet which is made by the effect of electricity , It consists of a bar wrought ( soft ) iron , A twisted copper wire coiling around the bar of iron and a dry cell ( battery ) , When the electric current passes through the wire , the bar of the wrought iron works as a magnet .

When an electric current passes through a coil winding around a wrought ( soft ) iron bar , the iron bar becomes a temporary magnet that is called the electromagnet . 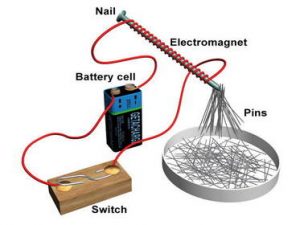 Uses of the electromagnet

The electromagnet is used in factories to move ( lift ) the heavy iron blocks as it is used for making big-sized winch ( crane ) .

The electromagnet is used in making many appliances ( devices ) as the electric bell , the electric mixer , the disc drive and the television .

How the electromagnet used for moving up the heavy iron blocks ?

The electric effect of the magnet

In the 19th century , the English scientists Faraday discovered that when a magnet is moved inside a coil of wire , an electric current passes through the coil , so , the lamp lights , this means that the electric energy ( electric current ) can be generated by using a magnet , Faraday used this discovery to make an electric generator known as the dynamo .

The electric generator ( the dynamo )

Dynamo is made up of a copper coil and a magnet , It converts mechanical ( kinetic ) energy into electric energy , where the kinetic energy moves the copper coil between the two poles of the magnet to produce the electricity .

The electric current can be generated in a coil of dynamo by moving the coil in the magnetic field ( between the two poles of a magnet and by moving a magnet inside the coil .

The generation of the electric current in the coil increases by increasing the motion of the coil between the two poles of magnet .

It consists of a small cylinder that touches the bicycle wheel tire , this cylinder is connected to a U-shaped ( horse-shoe ) magnet that is surrounded by a coil , It generates a small amount of electricity used to lighten the bicycle’s bulb .

It converts kinetic ( mechanical ) energy into electric energy , as when the bicycle moves the small cylinder turns because it touches the bicycle wheel tire , so , the magnet turns inside the coil causing the lightening of the bicycle’s bulb .

It consists of many great coils that turn between the two poles of a huge magnet , It converts kinetic ( mechanical ) energy into electric energy .

It is used in the electric power stations to generate a large amount of electricity used for lightening cities and operating factories .

The produced amount of electricity from the dynamo can be increased by using a strong magnet , and by increasing the number of turns in the moving coils .

There are three types of electric power stations which are :