The wind is free and with modern technology, it can be captured efficiently, wind energy is friendly to the surrounding environment as no fossil fuels are burnt to generate electricity from the wind energy. The wind is the moving air, It possesses some kinetic energy due to its high speed, The wind is a result of the solar energy as heating of land results in the movement of the air.

Wind power is renewable and there is no way we can run out of it as the wind energy originates from the sun. When the wind turbine is built, The energy it produces does not cause the greenhouse gases or other pollutants, The wind turbines take up less space than the average power station, This allows the land around the turbine to be used for many purposes such as the agriculture.

Wind turbines are a great resource to generate the energy in remote locations such as the mountain communities and remote countryside, The wind turbines can be a range of different sizes in order to support varying population levels.

The wind energy is an inexhaustible source of energy and it is virtually a limitless resource, The energy is generated without a polluting environment, It has tremendous potential to generate energy on a large scale. 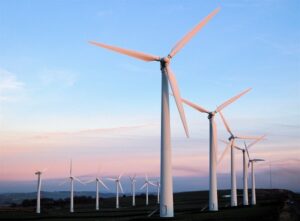 The wind power taps a natural physical resource, the windmill generators do not emit any emissions that can lead to the acid rain or the greenhouse effect, The wind Energy can be used directly as mechanical energy.

The wind turbines provide a clean and effective way of producing the power for home or business, they are built in the form of the vertical axis and horizontal axis, and the wind power is a clean fuel source.

The wind energy is a green energy source and does not cause the pollution, The potential of wind power is enormous, 20 times more than what the entire human population needs and the operational costs associated with the wind power are low.

The strength of the wind is not constant and it varies from zero to storm force, So, the wind turbines do not produce the same amount of electricity all the time, there will be times when they produce no electricity at all.

The wind turbines produce less electricity than the average fossil fuel power station, requiring multiple wind turbines to be built in order to make an impact, and they are built away from the places where the demand for electricity is there, Transmission from such places increases the cost of electricity.

The noise pollution from commercial wind turbines is sometimes similar to a small jet engine,  ِAlthough the wind energy is non-polluting, And the turbines may create a lot of noise.

Due to large scale construction of wind turbines in remote locations, wind turbines require them to dig deep into the earth which could have a negative effect on the underground habitats.

The wind can never be predicted, The wind turbines are suited to the coastal regions which receive the wind throughout the year to generate the power, So, The countries that do not have any coastal or hilly areas may not be able to take any advantage of wind power.

The wind energy can be harnessed only in those areas where the wind is strong enough and the weather is windy for most parts of the year, and the wind energy requires large open areas for setting up the wind farms.

The wind is an intermittent source of energy and it is not suited to meet the baseload energy demand unless some form of energy storage is utilized, and the Maintenance cost of wind turbines is high.

The manufacturing and installation of wind turbines require heavy upfront investments, both in commercial and residential applications, The wind turbines can be a threat to the wildlife.

The sources of energy and their importance