Electromagnetic waves are waves that do not need a medium to propagate where they propagate through vacuum. They are all transverse waves, such as visible light waves, infrared waves, and Radio waves (used in radars).

Mechanical waves are waves that need a medium to propagate, where they do not propagate through vacuum. They may be Transverse waves such as water waves or Longitudinal waves such as sound waves. 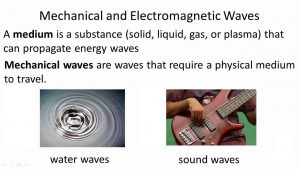 Electromagnetic waves are a type of transverse waves that can propagate in free space. They consist of an electric field and a magnetic field perpendicular to each other and to the direction of wave propagation.

The guard dogs sleep with one of their ears on the floor because the velocity of sound through solids (floor) is greater than its velocity through air, this enables them to hear the sound faster.

Some concepts related to wave motion and its properties

Laws used for determining the wavelength:

When the amplitude of a mechanical wave is 3 cm, this means that the maximum displacement achieved by the medium particles away from their rest positions in such wave is 3 cm (0.03m).

Wave velocity is constant through the same medium but it changes from one medium to another as follows:

Wave frequency is the number of complete waves produced from the sources in one second. The measuring unit of frequency is “Hertz”. The periodic time of the wave is the time taken to make one wave.

A glass cup is shattered when its natural frequency is equivalent to the frequency of a nearby sound source, as the amplitude of the oscillation of the cup particles becomes too large. This phenomenon is known as Resonance.

It is the relation between the wave velocity (V), its frequency (F), and its wavelength (λ).

This relation is known as the law of wave propagation and it can be applied for all types of waves.

The wave velocity of light and radio waves is the same although their frequencies are different because both of them are electromagnetic waves that have the same velocity in vacuum, so, the multiplying of frequency and wavelength of each of them = constant value= 3 × 108 m/s.