Mechanical energy is changed into heat energy, The temperature of objects increases by increasing their speed due to the increase of their kinetic energy, You feel warm when you rub your hands together in winter because the kinetic energy is converted into heat energy by friction, When you shake metallic spheres in a closed tube, their temperature increases because by friction.

How can we get heat energy?

When you invert your bicycle, Let the pedal turns fast, then press the bicycle brakes strongly, touch the frame of the wheel after it stops, you will feel that the tire and brakes become hot due to friction between them because mechanical energy is converted into heat energy. 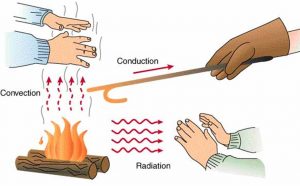 How is heat energy transferred?

The transfer of heat by conduction

Heat transfers by conduction through some solid objects (metallic spoon) from one side to the other, Cooking pans are made up of copper & aluminium because they are good conductors of heat, When you put a metallic spoon in a cup of hot tea for a time, you feel the hotness of the spoon because heat is transferred through solids by conduction.

The transfer of heat by convection

Transfer of heat by convection is the transfer of heat in gases & liquids, where hot molecules which have less density rise upwards, while colder molecules which have more density fall down, The freezer of the fridge is found at the top of the fridge because when air is cooled, its density increases, so, it falls down to cool the food in the refrigerator, while the hot air (with low density) rises up to be cooled again and so on.

The electric heater is placed at the bottom of the room because when air (around the heater) is heated, its density decreases, so, it rises up to warm the room, while the cold air (with high density) falls down to be heated again and so on, The air conditioner is fixed at the upper part of the room to cool the air in the upper part of the room, where its density increases, so, it falls down, while the hot air rises up to be cooled and so on.

The transfer of heat by radiation

The heat of the Sun is transferred to us by radiation because there is a space (vacuum) between the sun and the Earth and the transfer of heat by radiation doesn’t need any material medium through which heat transfers.

Wearing dark clothes in winter to absorb the heat of the Sun, Wearing light colours clothes in summer to reflect the sun rays, The heat of the Sun doesn’t reach the Earth by conduction or convection, It is not transferred by conduction because the air is a bad conductor of heat and it is not transferred by convection because there is a space (vacuum) between the Sun & the Earth.

There are a lot of technological applications that produce heat, but they are different in:

Some examples of technological applications which produce heat energy

Solar energy (the Sun) is the origin of most energies

Solar energy is considered the cleanest & cheapest source of energy because it doesn’t pollute the environment, It changes into other energies such as chemical energy is stored in petroleum oil & coal, Chemical energy is stored in plants by the photosynthesis process, Heat energy as in solar furnace (oven) and solar heater, Electric energy as in solar cells or solar batteries which is changed into:

The solar energy is the cause of the wind movement which has kinetic energy that in turn is used to generate electric energy, the importance of solar energy in our life because the Sun is the main source of most energies on the Earth’s surface.

The importance of good and bad conductors of heat