The satellite is considered as a very high tower that can be used in transmitting and receiving the wireless waves , Satellites can be classified according to their applications into Astronomical satellites which are huge telescope floating in the space and they can photograph the space accurately .

Explanatory and spying satellites : They abound the information needed by military and political leaders to make decisions and war administration . 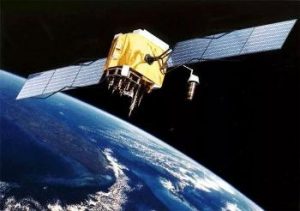 Man has dreamt for centuries to explore the space , He continued developing probes and rockets that launch space ships to orbit the Earth or reach further to another planet like Mars .

That dream has come true on the 4th of October 1957 when the first satellite ( Sputnik ) has sent into space , That was followed by sending other satellites and stepping onto the Moon , Still space exploration continues successfully .

Idea of launching the satellite

A satellite in its orbit is considered as an object falls freely towards the Earth’s surface ( because it is under the effect of Earth’s gravity ) , In spite of this it never reaches the surface , Isaac Newton explained this as follows :

At a certain projecting velocity , the projectile falls freely along a curved path at a constant distance away from the Earth’s surface , The projectile orbits the Earth in a roughly circular path, It becomes a follower of the Earth and named a satellite .

A satellite is an object projected at a certain velocity to rotate in a roughly circular path at a constant distance from the Earth’s surface .

The orbital velocity of a satellite is the velocity that makes the satellite orbit Earth in the roughly circular path at the constant distance from the Earth’s surface .

Finding the orbital velocity of a satellite ( v )

The attractive gravitational force between the satellite and the Earth is the centripetal force itself .

If the satellite stopped and its velocity became zero , it would move in a straight line under the gravity of Earth towards the Earth and fall down onto it .

To calculate the time taken by the satellite to complete one revolution around the Earth ( the periodic time T ) :

The velocity of satellite does not depend on its mass but depends on other factors .

Factors affecting the orbital velocity of a satellite

The planet mass: The orbital velocity of a satellite is directly proportional to the square root of the mass of the planet at a constant radius of the orbit.

As the mass of the satellite increases, a rocket of greater thrust is required to launch it into space and acquire the required velocity to orbit the Earth.