Converting the mass (m) into energy (E) is related to the Einstein relation (E = mc²) which is the scientific base of the nuclear bomb where it was found that the fission of the nucleus is associated with losing very small mass and changing into very huge energy as the square of the light velocity is very large quantity (c² = 9 × 1016 m² / s²).

This observation could not be explained by the classical theory of light but can be explained based on Planck’s hypothesis that electromagnetic radiation consists of photons which can collide with electrons as billiard balls collide (elastic collision).

We find that Compton’s effect proves the particle properties of light, we conclude that the photon moves as a particle which has mass and velocity (linear momentum) as well as the electron which proves the particle nature of light, The classical physics could not explain it and it could not be explained except by assuming the existence of photon.

The electron is a particle with a negative charge & has a wave nature, It could be accelerated (increasing its velocity) by electric field, it has a linear momentum PL = mv = h / λ, When it stops, it keeps its mass and loses its kinetic energy, It has mass during motion and rest (me = 9.1 × 10−31 kg).

When a beam of light of frequency (ν) falls on a surface then reflects:

If a beam of photons is incident on a certain surface at the rate of (φL) (photon /sec), then each photon falls on the surface and reflects back, suffers a change in linear momentum.

The rate of the change of the linear momentum of photon beam = 2 mc φL = 2 φLh ν / c, which equals the force applied by photons beam on the surface:

Where: (Pw) is the power in watts of the incident light on the surface

λ = c / ν ,  By multiplying both the numerator and denominator by Planck’s constant ( h ):

So, The wavelength of a photon equals the ratio between Planck’s constant and the linear momentum of a photon.

The macroscopic and microscopic models of light

When photons fall on a surface, then if photons wavelength (λ) is close to the intermolecular distances, then photons penetrate through atoms and this is what happens in case of X-rays, The microscopic particle model of light is applied in this case.

When photons fall on a surface, then if photons wavelength (λ) is much larger than the intermolecular distances, then photons deals with this surface as a continuous surface and reflect from it, The macroscopic wave model of light is applied in this case.

The particle model of light (microscopic) is applied when an obstacle in the dimensions of atom or electron has obstructed photons path, It studies the individual photon separately as a ball of radius equals the wavelength of the wave (λ) and vibrates in the frequency (ν).

The wave model of light (macroscopic) is applied when an obstacle of dimensions much larger than the wavelength of wave has obstructed the photons’ path, it studies the photons’ stream as a whole in the form of a wave has a magnetic field and electric field perpendicular to each other and to the direction of their propagation.

Wave properties of a particle

De-Broglie has proved that as waves have a particle nature, particles have a wave nature such that a moving particle is accompanied by a wave its wavelength can be deduced as follows:

De-Broglie equation for particles: The wavelength of a wave accompanying a moving particle equals the ratio between Planck’s constant and the particle’s momentum.

The factors affecting the wavelength associating a moving particle

So, the wave nature for light and electrons is as follows:

The wave nature of light

The wave nature of the electrons

It is clear that we can use an electron ray as we use light ray, This is the base of the electron microscope. 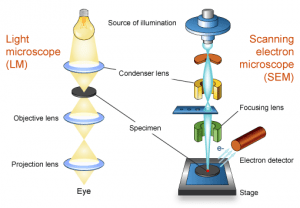 The wave nature of the electron

Accelerating a bundle of electrons liberated under a high potential difference (V) and the velocity of the liberated electrons can be determined from the relation:

We can calculate the wavelength of the wave which is associating the motion of the electron by using De-Broglie equation: λ = h / mv

So, by increasing the potential difference between the cathode and anode in the electron microscope its kinetic energy increases the velocity of the electron (v) increases, the wavelength (λ) of the wave which is associating the electron decreases until it becomes less than the dimension of the body, so a magnified image is formed.

Optical microscope: The used beam is a light beam, The used lenses are glass lenses to concentrate the light on the body to magnify it, resolving power is low, magnification power is limited as it fails to distinguish the fine details.

Electron microscope: The used beam is electron beam with wavelength shorter than the wavelength of the light beam by 1000 times, The used lenses are electronic (magnetic) lenses to focus the electron beam on the body to magnify it, resolving power is high as the electron can carry high kinetic energy and hence very short wavelength (λ), so it can detect very small objects that the normal light fails to observe, magnification power is very high, so it can distinguish the fine details.

What are uses and importance of Microscopes?