The electrical measurement devices are divided into types such as analog instruments and digital instruments, Moving coil galvanometer (sensitive galvanometer) is a device used to detect very weak current in the electric circuits, It is used to define the direction of these currents, measuring their intensities and determining their polarities.

Moving coil galvanometer consists of a rectangular thin wire coil wrapped around a light aluminum frame mounted on a soft iron core, The frame is pivoted on agate bearings to facilitate its movement, The group rotates between poles of a U-shape magnet.

The permanent magnet poles are curved to provide a uniform radial magnetic field, thus the magnetic flux density is constant and perpendicular to the side of the rectangle irrespective of coil position.

A pair of spiral springs is used to serve as current leads to the coil and to control its motion as they return the coil to its original position when the current is cut, The coil and pointer rotate either in clockwise or counterclockwise direction.

It depends on the torque acting on a coil carrying an electric current and moving in a magnetic field, So, due to the flow of an electric current in the coil, two parallel forces are generated, equal in magnitude and opposite in the direction act on the two sides of the coil, the forces produce a torque and the coil rotates around its axis.

When the electric current passes in the coil, the magnetic forces produce a torque that rotates the coil in the clockwise or counterclockwise direction depending on the current direction.

During the rotation of the coil, torsion is produced in the spiral springs against the torque acting on the coil of the galvanometer and increases as the point deflection angle increases.

When the torque due to the magnetic forces balances the torsion of the spiral springs, the pointer stops at a certain reading and indicates the industry of the electric current.

If the pointer in the middle:

This constant value is called sensitivity of galvanometer, The measuring unit of sensitivity is degree /micro Ampere (deg/μ A), It can be represented graphically as follows:

Slope =  θ / I = Sensitivity of galvanometer

The galvanometer sensitivity (θ / I) is the scale deflection per unit current intensity passing through its coil.

To determine the electric current intensity passing in the galvanometer:

Applications of the galvanometer

The galvanometer can be converted into:

Ammeter is used to measure the large direct electric currents, Ammeter is connected in the electric circuit in series, So that the same current passing in the circuit, passes through it, It consists of a galvanometer, its coil (Rg) is connected in parallel to a very small resistance called shunt resistance (Rs) to increase the measuring range. 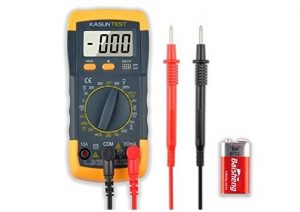 Importance of the shunt resistance

The idea of working: The torque which is affecting a coil carrying electric current in a magnetic field.

The shunt resistance (Rs) is a small resistance connected in parallel with the galvanometer coil to convert it into ammeter to measure larger electric currents.

Deduction of the shunt resistance

Rg, Rs are connected in parallel.