The manufacturers are using machine automation & controls to produce high quality products faster & more efficiently , These automated systems offer critical information to help the managers make good business decisions , The ability to produce the products while providing the data is an important part of automation .

Technology has changed the nature of manufacturing , In the past , manufacturing & fabrication were all done by hand by the people , Now the computers & technology have penetrated the industry , Automation becomes the competitive advantage in today’s manufacturing world , Automation has allowed for the companies to mass produce the products at outstanding speeds and with great repeatability & quality .

In Automatic control or Automation , You can use many control systems for operating the equipment such as machinery , processes in the factories , The boilers & the heat treating ovens , switching on telephone networks , steering & stabilization of the ships , the aircraft & the other applications and the vehicles with minimal or reduced human intervention .

Although machine automation becomes the resource for remaining competitive in the manufacturing industry , there are some factors to be considered to be competitive & to get a return on the investment  , Depending on the operations , automation may or may not be a good fit , If it is a small operation with low production quantities , the initial investment of purchasing the automated machines would not be economical . 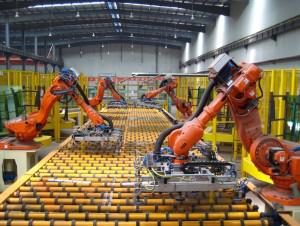 Fixed automation stands for the automated production facility in which the sequence of processing operations is fixed by the equipment configuration , It is known as hard automation , the programmed commands are contained in the machines in the form of the cams , the gears , wiring & the other hardware that is not easily changed over from one product style to another .

Fixed automation has high production rates & high initial investment , It is suitable for the products that are made in large volumes , Examples of fixed automation contain machining transfer lines found in the automotive industry , the automatic assembly machines & certain chemical processes .

The computers carry out the sequential control & feedback control , a single computer will do both in the industrial application , Programmable logic controllers (PLCs) are a type of special purpose microprocessor that replaced many hardware components such as the timers & sequencers used in relay logic type systems .

Automation are carried out by many means such as mechanical , hydraulic , pneumatic , electrical , electronic devices & the computers , Modern factories , the airplanes & the ships use all these combined techniques .

Machine automation improves the product quality , accuracy , repeatability , It offers less human error , When the machine is programmed to perform a repeated task , Machine automation offers higher volume of production , Automated equipment is capable of producing much larger production volumes than a largely human workforce and it will increase the profitability .

Automation will speed up the production time , There is no one perfect & we are all prone to making the mistakes , Which is why the machine that performs repeated tasks is less likely to make the mistakes than the employee , when the automated machine is programmed to perform the task over & over again , the accuracy compared to an employee is far greater .

Machine automation offers less employee costs , With a smaller human workforce , When you add the automated machines to the operation , So , You need less employees to get the job done , It causes less safety issues , which leads to financial savings , there are great costs that are diminished or reduced such as the payroll , health care , the benefits & sick days .

Automation decrease the number of employees who perform the tasks that can be dangerous & prone to the injury , So , It increases the safety & the work environment will be safer , Automation mitigates the effects of the labor shortages , In the skilled trades , this pro is especially powerful because we are dealing with a deficit of skilled workers able to perform the roles required in our factories , plants and sites .

Automation eliminate mindless tasks , There’s a worthy argument that automation merely eliminates the mindless , manual , clerical tasks that are routine & boring , So , we are ultimately improving the general level of working conditions .

Machine automation increases worker safety , If you transfer your workforce from active , hands-on positions , to supervisory roles , you’ve increased the overall safety , This is a pretty major selling point for automation , Benefit of automation contain labor savings , savings in electricity costs & the material costs , and the improvements to quality , accuracy & precision .

When you have the machine that can perform a certain task , it limits the flexibility & variety of tasks that the employee could do , You will have unpredictable costs which may exceed the actual cost saved by the automation itself , such as the research & the development costs of automating process and the cost of training employees to operate the automated machines .

Machine automation causes more pollution than the human worker , Different types of the machines operate using the motor which may require the gases or the chemicals in order to operate , This can cause an increase in the pollution in the workplace .

Automation in manufacturing comes with a large capital investment  , The automated machines can be one of the most costly operating costs for the company , It increases unemployment rates as there are less employees , Automation increases the efficiency in industry but it will cause a loss of human jobs due to machines .

The employee can perform a flexible variety of tasks , whereas the machine is limited to what it’s been programmed to do , There is a world of unpredictable or unknown costs that come with new technology , such as maintenance , repair , supervision , training , etc .