Advantages and disadvantages of robots in the factories

Industrial robots are used for manufacturing, they are automated, programmable, and capable of movement on three or more axes. Many applications of robots such as welding, painting, assembly, disassembly, picking and placing for printed circuit boards, packaging and labeling, palletizing, product inspection, and testing; are all accomplished with high endurance, speed, and precision, and they can assist in material handling.

Robotics is effective in the service industry as it facilitates many types of tasks with ease, It assists humans with powered human exoskeletons, autonomous mobile robots, and telepresence robots. Robots increase productivity, and they can tackle repetitive tasks more efficiently than humans as robots are designed to do the same without any fatigue or break. robots can increase productivity in the manufacturing process.

Industrial robots can be equipped with any type of tool, they are used with precision, accuracy, speed, and repetitiveness that can not be matched by humans. Industrial Robots have a multitude of sensors and vision systems capable of viewing images to aid with their computer-based control.

Industrial robots work in many industries, such as semiconductors and automobiles, plastics processing, and metal forging. they are worked in any repetitive operation, particularly if it’s dangerous or difficult for people. Industrial robots help manufacturers address many of the key challenges they face, including tight labor pools, global market competitiveness, and safety.

The robots help increase the number of manufactured products and decrease the production of defective goods, they can produce the same quality products during the production process, they do not get exhausted and they work for a long period of time. 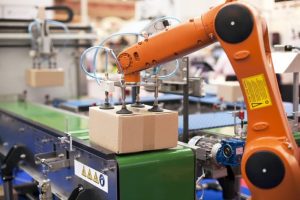 Robots in the factories

The robots help in doing dangerous jobs, they can work at a constant speed without sleep, breaks, vacations, and salaries and they can produce more than human workers.

The robots can perform dangerous applications in hazardous settings, They minimize material waste, they can save time & effort and their movements are always exact.

Intelligent robots help increase productivity in factories, they made businesses achieve more benefits, they can reduce the companies’ loss, they are used in dangerously polluted environments such as chemical spills and radioactive in nuclear power plants, and they are used in radioactive waste clean-up.

Robots have more precise guidance in doing the tasks, they are linked to powerful computers or controllers, and they contain machine vision sub-systems acting as their visual sensors, so, they are more flexible to the orientation of objects that they can perform the tasks on them.

We will see in the future machines which work alongside humans and they will learn from them to perform an increasing number of manufacturing tasks.

Industries prefer utilizing robots to human workers, So, the unemployment rate will increase, and many people who can not get work will become poorer while the company owners will get richer.

The robots can work in the factory with limitations, The human does the tasks that require creativity, decision-making, adaptation, and job learning.

If the employees have no experience to deal with the robots, they will need a training program to interact with the new robotic equipment, it will take time and cost a lot of money in the financial output.

The robots can protect human workers from some hazards, The robots can create other safety problems and they can cause new dangers which must be taken into consideration.

The companies must plan before using industrial robots as using the robots without planning in the factories does not guarantee the results, so the companies will have difficulty achieving their goals.

The robots can produce lots of electronic waste, They can not do something which they do not design to do and they make people lazy.