Robotic surgery is similar to laparoscopic surgery, where they both use small incisions, a camera, and surgical instruments. Although, instead of holding and manipulating the surgical instruments during robotic surgery, the surgeon will sit at a computer console and use controls to manipulate the robot. The console enables the surgeon to view high-definition, magnified 3D images with increased accuracy and vision inside your body.

Laparoscopic and robotic surgery are both minimally invasive procedures that provide you with the most precise surgery and the shortest recovery, but a few differences exist. The surgeon’s hands are not performing the procedure, there’s a robotic machine that has the laparoscope & surgical instruments attached to it. Robotic surgery provides the surgeon with a greater range of motion and precision, which can lead to less bleeding.

Surgeries take less time to perform because of two advances in surgical technology: laparoscopic surgery and robotic surgery. Laparoscopic surgery is a popular surgical option because it requires a much smaller incision than traditional open surgical methods. Robotic surgery isn’t a good option in some cases for certain surgeries and medical conditions. In some situations, the surgeon may recommend traditional open surgery. Open surgery requires a larger incision, and the surgical team manipulates tissue and muscle with their hands instead of smaller tools.

Robotic surgery is a laparoscopic procedure, only with an added layer of technology, the surgeon makes a button-sized incision in the abdominal cavity for the insertion of a telescope, three additional small incisions are made to place narrow tubes used for interchangeable instruments. Laparoscopic surgery and robotic surgery can minimize the incision size and can reduce risks associated with surgery, Patients may experience less discomfort, along with faster recovery times when they undergo laparoscopic or robotic surgery. 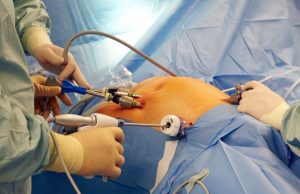 Laparoscopic surgery is made by a tiny camera, attached to a thin tube, and is inserted into the incisions, the camera is called a laparoscope, it allows the surgeon to see inside the patient’s body in order to perform the surgery without making larger incisions. After the procedure is complete, he closes the incision with a small number of stitches. Laparoscopic surgery was a big breakthrough for surgical medicine due to how it made many procedures faster, less risky, and easier to recover from.

In laparoscopic surgery, the surgeons make small incisions into which they insert small surgical tools and a camera, The camera enables the surgeon to see inside your body to perform the surgery, laparoscopic surgery offers less blood loss, smaller scars, shorter stay in the hospital, and faster recovery times, It reduces pain, It offers 2D images and these tools present a limited range of motion, so it is difficult for the surgeon to work in small spaces. 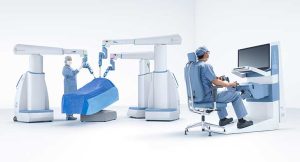 Robotic surgery is minimally invasive surgery because it allows surgeons to make a very small incision, the surgeon uses a computer to control the robotic arms that perform the procedure. Robotic surgery offers unparalleled flexibility and precision during surgery. More than 7 millions procedures have been performed using the da Vinci robots, most commonly hysterectomies and prostatectomies.

Robotic surgery is surgery that is carried out by a robot, it can perform complicated surgical techniques through tiny incisions, leaving very little scar tissue behind, The robot is the tool just like a scalpel or a set of forceps would be a tool for a skilled surgeon, The surgeon guides the surgical instruments at the end of the robot’s arms with high definition 3-D cameras at the robot‘s controls.

The surgeon views a highly magnified, three-dimensional image of the patient’s interior structures, All movements of the camera and robotic instruments are performed in real-time by the surgeon using ergonomic finger controls, The tips of these instruments can make any wrist-like turn that the surgeon desires, The procedure is performed using instruments such as miniature tweezers and scissors the size of a fingernail (although these scissors appear to be the size of hedge clippers to the surgeon observing them via video).

The surgeon has complete control of all the robotic arms – instruments and camera without relying on an assistant, Natural hand tremor is filtered out by the robot software to allow tremor-free instrument movement and camera view, Magnified (up to 10x) High Definition (HD) 3-D view of the operating field.

The wrist at the end of a laparoscopic instrument (EndoWrist) mimics the movements of the human wrist, it exceeds the natural range of motion of the human hand, Less manipulation of incision sites on the abdominal wall, through fulcrum points and wristed instruments, It reduces local trauma and potentially post-operative pain.

The surgeon can perform more complex surgeries – previously thought to be performed only through a larger open incision – laparoscopically. in gynaecology, Robotic surgery allows laparoscopic hysterectomy in a larger uterus over traditional laparoscopic surgery. It also allows minimally invasive surgery in more overweight patients and reduces their overall risk of surgery.

Robot-assisted (robotic) surgery uses small instruments attached to a robot’s arm to conduct surgical procedures, The qualified, highly-skilled surgeon controls the robotic arm, using it to enhance surgical precision, The robot improves surgical outcomes and it can boost patient safety by enabling the surgeon to use very tiny incisions and to achieve unmatched precision.

Robot-assisted surgery is applied in surgery to excise prostate cancer as it enables access to anatomical areas that are difficult to reach, urologists can use surgical assistance, enhanced precision, systems networking, dexterity, and image guidance made possible with robots, Urologists can perform complex procedures that are difficult to do using conventional laparoscopy.

The surgical arms are pneumatic, powered by compressed air and electricity to control the operation, The surgeon remains in the operating room throughout the procedure, and a team of nurses monitors the patient during the process. the surgical robot reduces hospital stay to just one or two days. It offers a 3D view, The thin telescope inserted into the patient’s body contains two lenses, each served by a separate camera, This allows for smoother instrument movements and better appreciation of subtle tissue characteristics.

Robotic surgery increases surgeons’ control, With laparoscopic surgery, each hand controls one instrument or the camera (a total of two items), With robotic surgery, the surgeon controls all camera movements and three instruments (four items), The robotic instruments move smaller distances in the body than the hand controls move at the surgeon’s control console. This added precision is useful with the system’s magnified view.

Surgeries are exhausting for the attending surgeons, they are on their feet for hours at a time, completing the surgery and attending to the patient, Surgery robots allow the surgeon to sit comfortably while operating. This could help keep surgeons fresh and aware for the duration of their surgeries, preventing fatigue-related errors and reducing the potential for medical malpractice.

Some surgeries require a high degree of accuracy, Surgery robots aren’t exposed to the shaking or other strain related movements a human surgeon might experience, Each robotic hand can rotate 360 degrees multiple times, Which increases its range of motion, It is equipped with small joints that allow each arm to bend like a human wrist, This is an improvement over traditional laparoscopic tools, which are straight and unable to bend so they are harder to manipulate, It is equipped with a 3D high-definition camera that offers a better view of the surgical site.

Surgery times can be increased, due to the need to adjust the robot properly to the patient, leading to a potentially increased risk of infection. Some systems require extra means of fastening the robot to the patient, which could lead to increased blood loss or infection, Robotic malfunction can occur. With robot-assisted surgery, system components such as robotic arms, cameras, robotic towers, binocular lenses, and instruments can fail.

Robotic surgery is an expensive technology. Installing the robotic surgery system is very high and it can increase the cost of a surgical procedure, Surgical robots are costly to maintain, and their operation requires additional training, which is also expensive, a surgery utilizing a da Vinci surgery robot will cost between $3,000 and $6,000 more than a traditional laparoscopic procedure.

Robotic surgery is not as accessible as conventional laparoscopic surgery due to availability and cost, It has relatively large footprints and relatively cumbersome robotic arms. This is an important disadvantage in crowded operating rooms.

The issue of latency is one of the most significant problems with robotic surgery, the time it takes for the robot to carry out the surgeon’s commands, It takes a few moments for the computer to communicate with the robotic arms, While this isn’t an issue for routine surgeries, so it is difficult for surgeons to respond quickly to problems that occur during the operation.

Applications of Artificial intelligence in the medical field & Healthcare

The importance and uses of robots in medicine