Robots in the automotive industry

The industrial robot can perform the tasks that humans often found dangerous or boring, It can do them with consistent speed and precision, The top 5 applications that grabbed our attention such as Robotic Painting, Robotic Vision, Collaborative Robots, Robotic Hands, and Collaborative Robotics.

The robot systems in the auto industry are cost-effective because they can do the job quicker than their human counterpart, They are efficient in their jobs, They offer more speed and accuracy than human workers, artificial intelligence becomes the most important factor in modern industrial robots.

The typical applications of the robots include welding, painting, assembly, picking and placing for printed circuit boards, packaging and labeling, palletizing, product inspection, and testing, industrial robots offer high endurance, speed and precision, They can help in material handling and provide interfaces. 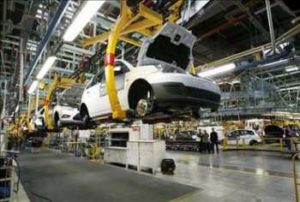 The robot factory workers aren’t without their limitations, The industrial robots are mere automatons, The humans program them to perform the simple task, & they repeat those tasks over and over again, The tasks that require decision-making, creativity, adaptation, and on-the-job learning tend to go to the humans.

But when the job is just right for the robot, productivity tends to increase dramatically, The most obvious impact of industrial mechanization is that it eliminates many unskilled job positions.

Industrial robots fill unwanted factory jobs and they create more technical positions dedicated to their upkeep, In the same way that the computerized office depends on various techies, so, The robotic workers require technical upkeep too, The human labor is simply cheaper.

Some robots are programmed to carry out specific actions over and over again (the repetitive actions) without variation and with a high degree of accuracy, These actions are determined by programmed routines that specify the direction, acceleration, velocity, deceleration, and distance of the series of coordinated motions.

Some robots are more flexible to the object orientation on which they are operating or the task that has to be performed on the object that the robot may need to identify, The robots contain machine vision sub-systems acting as their visual sensors, linked to the powerful computers or the controllers.

Advantages of Automating with Industrial Robots

Industrial automated robots can dramatically improve product quality, The applications are performed with high precision and repeatability, This level of consistency can be hard to achieve any other way and the robots are being improved.

Industrial robots increase production because the automated robot can work at a constant speed without taking breaks, and vacations & they do not sleep, It has the potential to produce more than the human worker.

Industrial robots increase workplace safety, The workers are moved to supervisory roles where they do not have to perform dangerous applications in hazardous settings, The light screens or barriers are available to keep the operator out of harms way.

Industrial robots reduce savings, The improved worker safety leads to financial savings with fewer healthcare and insurance concerns for employers, Also you can consider the quality and customer satisfaction which means returning customers and more business.

Human workers are working alongside the robots now in handling and assembly applications in the automotive industry, and the robots are performing monotonous and sometimes dangerous tasks that humans do not enjoy.

With the robots doing all the dirty work, They reduce the chance of worker injury or error, This saves the companies money on downtime and sick time, while the robots increase the productivity level overall.

The automotive industry is well known for its intensive use of industrial robotics, The production lines need to be more flexible, efficient, and precise, Many enhancements have been made to the production lines to help the workers in their daily tasks.

Industrial robots have much expense as the initial investment to integrate the automated robotics into your business can be significant when the business owners limit their purchases to the new robotic equipment only, The robotic automation cost should be calculated in the business’ financial budget and the regular maintenance needs can increase the financial as well.

Industrial robots do not guarantee results, You should devise a specific production plan from the beginning to the end as it is absolutely crucial, If the company does not put the work plan into the Industrial robots, The automation may not help achieve the goals needed.

Industrial robots need a lot of expertise, The employees will need to train for programming and interacting with the new robotic equipment, It takes time and financial output.