Exoskeleton technology can enhance precision during surgery, It can help nurses move and carry heavy patients. It offers the protection against physical damage and abrasion, it increases leverage, The design of exoskeletons aims to offer back support, sense the user’s motion, and send the signal to motors which manage the gears.

The powered exoskeleton allows complex movements due to jointed appendages, It is powered by a system of electric motors, pneumatics, levers, hydraulics, or combination of technologies that allow for limb movement with increased strength and endurance, It is a wearable mobile machine, It is known as power armor, powered armor, powered suit, exoframe, hardsuit or exosuit. 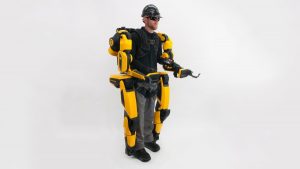 Full-body powered exoskeletons have been developed to assist with heavy loads in the industrial setting and for specialized applications such as nuclear power plant maintenance. Exoskeletons can be used to help firefighters and other rescue workers to climb stairs carrying heavy equipment and it can be examined for use in logistics.

The industrial exoskeletons should be lightweight, comfortable, safe, and minimally disruptive to the environment, single-joint exoskeletons (i.e. intended to assist only the limb involved in specific tasks) are more appropriate than full-body powered suits.

Powered exoskeletons can improve the quality of life of individuals who have lost the use of their legs by enabling system-assisted walking, Exoskeletons—that may be called “step rehabilitation robots”—may also help with the rehabilitation from stroke, spinal cord injury or during aging, and many prototype exoskeletons are under development.

The Ekso GT, made by Ekso Bionics, is the first exoskeleton to be approved by the US Food and Drug Administration (FDA) for stroke patients. The German Research Centre for Artificial Intelligence has developed two general-purpose powered exoskeletons, CAPIO and VI-Bot. These are primarily being used for teleoperation.

Parker Hannifin’s Indego Exoskeleton is an FDA-Cleared, electrically powered support system for legs that helps spinal cord injury patients and stroke patients walk, ReWalk features powered hip and knee motion to enable those with lower limb disabilities, including paraplegia as a result of spinal cord injury (SCI), to perform self-initiated standing, walking, and stair ascending and descending, ReStore, a simpler system by the same manufacturer, attaches to a single leg to assist with gait retraining, and was approved by the FDA in 2019.

In 2019, the US Army’s TALOS exoskeleton project was put on hold, A variety of “slimmed-down” exoskeletons have been developed for use on the battlefield, aimed at decreasing fatigue and increasing productivity, Lockheed Martin’s ONYX suit aims to support soldiers in performing tasks that are “knee-intensive”, such as crossing difficult terrain, Leia Stirling’s group has identified that exoskeletons can reduce a soldier’s response times.

The exoskeleton can’t stretch or expand, special modification is required for gaseous exchange and sensory pick up, it is a major restriction on growth, it needs to be shed at regular intervals, Humans exhibit a wide range of physical size differences in both skeletal bone lengths and limb and torso girth, so exoskeletons must either be adaptable or fitted to individual users.

The potential new risk factors for workers such as lack of mobility to avoid a falling object, and potential falls due to a shift in the center of gravity. The power supply requires frequent replacement or recharging and may risk an explosion due to the thermal runaway.

The flexibility of human anatomy is a design issue for traditional hard robots, Several human joints such as the hips and shoulders are ball and socket joints, with the center of rotation inside the body, Since no two individuals are exactly alike, fully mimicking the degrees of freedom of a joint is not possible, the exoskeleton joint is modeled as a series of hinges with one degree of freedom for each of the dominant rotations.