They are walking robots, They use their legs to control their locomotion, They are used to offer movement in highly unstructured environments, Although they are complex to design, they have a greater edge over wheeled robots in terms of navigation on any kind of path or terrain, Legged robots are more versatile than wheeled robots, they can traverse many terrains, They can imitate legged animals, such as humans or insects, in an example of biomimicry.

They can be categorized by the number of limbs they use, that determines gaits available, Many-legged robots can be more stable, while fewer legs robots offer greater maneuverability. 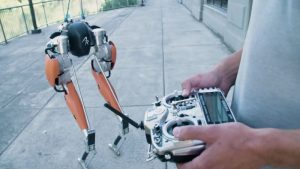 One-legged robots (pogo stick robots) can use a hopping motion for navigation, They are designed to be hopping robots, They have to hop all the time and if it stops, then it falls over, They are stable, They can balance themselves, They can hop over and move in any kind of terrain as they take a running start and jump over any obstacles, They are very efficient, but they come with complex design & control, The typical one-legged robot can be constructed by controlling robot posture, hopping height & hopping distance.

Two-legged robots (Bipedal robots) can exhibit bipedal motion, Stability is maintained by calculating each step and moving the weight in a well-defined way, but they face two primary problems: stability control that refers to the robot’s balance, and motion control that refers to the robot’s ability to move, Bipedal robot has 2 legs, and the classical example is the Humanoid robot.

Two-legged robots must maintain balance in the forward-backward direction even at rest, Some robots solve this problem with large feet that offer greater stability while reducing mobility, more advanced systems use sensors such as accelerometers or gyroscopes to present dynamic feedback that approximates the human being’s balance, sensors can be used for motion control & walking.

Two-legged robots can be used in the same human working environment without making any changes, they are designed to imitate human behaviour, Two-legged robot are dynamically stable and require complex control algorithms to balance them when standing, Two-legged robots include Boston Dynamics’ Atlas, Toy robots such as QRIO, Honda’s ASIMO, NASA’s Valkyrie robot and The ping-pong playing TOPIO robot.

Quadrupedal robots (Tetrapod robots) are statically stable, especially when they are not in motion, they have 4 legs and their walking pattern similar to that of animals, they are well balanced in posture, At slow speeds, They can move either by moving one leg at a time, ensuring a stable tripod or moving the alternate pair of legs to walk, Four-legged robots include: The TITAN series, WildCat, Cheetah and the dynamically stable BigDog.

Six-legged robots (hexapods) offer greater stability than bipedal or quadrupedal robots, They have 6 legs, Their final designs mimic the mechanics of insects, and their gaits may be categorized similarly, These include the slowest wave gait, where pairs of legs move in a “wave” from the back to the front, Tripod gait which is a slightly faster step, where three legs move at once, The remaining three legs offer a stable tripod for the robot.

They can move either by moving each pair of leg in a consecutive manner or moving alternate legs of each pair, Six-legged robots include Odex that has onboard computers that control each leg, Genghis is one of the earliest autonomous six-legged robots, and the modern toy series, the Ohio State University (OSU) Hexapod, OSU Adaptive Suspension Vehicle (ASV) etc.

Hexapods (Six-legged robots) offer greater static stability while moving and standing, They can be perfectly stable on just three legs, the remaining legs of the hexapod robot offer a great deal of flexibility and increases its capabilities, they are used to test various biological theories about insect locomotion and motor control, Hexapod robots deploy various different types of gaits to make a move.

They are inspired by spiders & other arachnids, as well as some underwater walkers, They offer the greatest stability that enables some early successes with legged robots, Eight-legged robots such as Dante, a Carnegie Mellon University project designed to explore Mount Erebus, The T8X, a commercially available robot designed to emulate a spider’s appearance and movements.

Hybrid robots can use a combination of legs & wheels, This grants the machine the speed and energy efficiency of wheeled locomotion as well as the mobility of legged navigation.