Robots come with powerful, heavyweight automated arms that perform tasks such as welding, painting or assembly within the confines of an enclosure, Most robot accidents take place during non-routine operating conditions, such as programming, maintenance, testing, setup, or adjustment, During many of these operations, the worker may be within the robot‘s working envelope where unintended operations could result in injuries.

Robots in the workplace

Automated systems offer safety benefits to human workers. Robots can prevent injuries or adverse health effects resulting from working in hazardous conditions, Some examples are musculoskeletal disorders due to repetitive or awkward motions, or traumatic injuries (for example, in poultry processing, where cuts are common). Robots can prevent multiple hazards in emergency response situations such as chemical spills.

Industrial robots are used for tasks considered undesirable for human workers, Robots can minimize risks stemming from human error, If a job is repetitive and boring, human workers tend to make a mistake, whereas robots can do these things the same way time after time. 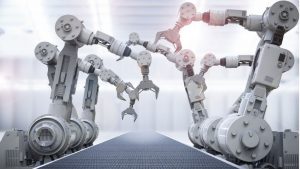 Hand guiding is a robot that moves only under an operator’s control. Speed & separation monitoring is a robot that automatically decreases its speed as a worker approaches to the point where it stops when it’s about to be touched. Safety-rated monitored stop is similar to the approach used with traditional industrial robots, The work stops when the worker would like to enter the workspace of the robot.

The industrial robot can be either fixed in place or mobile for use in industrial automation applications such as manufacturing, inspection, packaging & assembly. It is an automatically controlled, reprogrammable, multipurpose manipulator, programmable in three or more axes. The professional service robots can perform commercial tasks outside of industrial automation applications, a robot used in cleaning, delivery, firefighting or surgery.

It is an aspect of occupational safety & health when robots are used in the workplace. Many robots are used in the workplace, This includes the traditional industrial robots, Emerging technologies such as drone aircraft and wearable robotic exoskeletons, Types of accidents such as collisions, crushing, and injuries from mechanical parts, Hazard controls such as physical barriers, good work practices, and proper maintenance.

Robots are used in the workplaces around the globe, especially cobots, the machines designed to work next to humans, But when considering implementing any technology, it’s essential to keep safety at the forefront. Sensors make robotic equipment stop if it comes too close to humans.

Poor workplace design & human error can cause most injuries, the Occupational Safety and Health Administration (OSHA) has investigated robot-related deaths and injuries, Injuries & fatalities could increase over time because of the increasing number of collaborative and co-existing robots, powered exoskeletons, and autonomous vehicles into the work environment.

Many hazards and injuries result from the use of robots in the workplace, Some robots are fast and powerful, This increases the potential for injury as one swing from the robotic arm, could cause serious bodily harm, There are additional risks when the robot malfunctions or is in need of maintenance.

The worker who is working on the robot may be injured because the malfunctioning robot is typically unpredictable, the robotic arm that is part of a car assembly line may experience a jammed motor, the worker that is working to fix the jam may suddenly get hit by the arm the moment it becomes unjammed, if the worker is standing in the zone that is overlapping with nearby robotic arms, he may get injured by other moving equipment.

There are seven sources of hazards that are associated with human interaction with robots and machines: human errors, control errors, unauthorized access, mechanical failures, environmental sources, power systems, and improper installation, Human errors can be anything from one line of incorrect code to a loose bolt on a robotic arm.

Many hazards can stem from human-based error. Control errors are intrinsic and are not controllable nor predictable, Unauthorized access hazards occur when a person who is not familiar with the area enters the domain of a robot, Mechanical failures can happen at any time, and a faulty unit is usually unpredictable.

Electromagnetic or radio interference in the environment can cause malfunction to the robot, Power systems are pneumatic, hydraulic, or electrical power sources; these power sources can malfunction and cause fires, leaks, or electrical shocks, Improper installation is fairly self-explanatory; a loose bolt or an exposed wire can lead to inherent hazards.

Robotic exoskeletons can be used in construction to decrease the load to the spine, improve posture, and reduce fatigue; however, they can increase chest pressure, limit mobility when moving out of the way of a falling object, and cause balance problems.

Unmanned aerial vehicles are used in the construction industry to do monitoring & inspections of buildings under construction, This reduces the need for humans to be in hazardous locations, but the risk of the UAV collision presents a hazard to workers, For collaborative robots, isolation is not possible, Possible hazard controls such as collision avoidance systems, and making the robot less stiff to lessen the impact force.

You can prevent injuries by implementing hazard controls, There can be risk assessments at each of the various stages of a robot’s development. Risk assessments can help gather information about the robot’s status, how well it is being maintained, and if repairs are needed soon.

Safeguarding devices can reduce the risk of injuries, They can include engineering controls such as physical barriers, guard rails, presence-sensing safeguarding devices, etc, Awareness devices are used in conjunction with safeguarding devices, They are systems of rope or chain barriers with lights, signs, whistles, and horns, Their purpose is to be able to alert workers or personnel of certain dangers.

Operator safeguards can protect the operator and reduce the risk of injury when an operator is within close proximity of the robot, Proper maintenance of robotic equipment is critical in order to reduce hazards, Maintaining a robot ensures that it continues to function properly, thereby reducing the risks associated with a malfunction.