Gastrectomy is the surgical removal of all or part of the stomach, When this procedure is performed by a doctor using an advanced surgical device called the da Vinci Surgical System, it is referred to as robotic surgery or robotic gastrectomy, Robotic surgery offers a magnified, high-definition view of the tumor that allows the surgeon to visualize tissues and cells that are not visible to the naked eye.

Robotic gastrectomy surgery may be recommended as a treatment for stomach cancer, Robotic instruments bend and rotate in many ways, often leading to better surgical outcomes, lower complication rates, and less scarring, Although the name, Robotic surgery is not performed by a robot, The surgeon control the robot all times.

Robotic surgery allows surgeons to operate through a few small incisions (cuts) instead of the single large incision used in traditional open surgeries, In this way, it is similar to another form of minimally invasive surgery called laparoscopic surgery, however, unlike laparoscopic surgery, robotic surgery uses a higher definition camera and more advanced instruments that are attached to a four-armed robot.

The arms of a four-armed surgical robot are operated by the surgeon using the robotic console, and the surgeon is in control the entire time, The proper name for the robot and console is the da Vinci XI surgical system, The da Vinci System gives surgeons: the three-dimensional high-definition view inside your body, Wristed instruments that bend and rotate like the human hand but with a greater range of motion, State-of-the-art energy, and stapling devices to optimize dissection, cutting, and bowel connections. 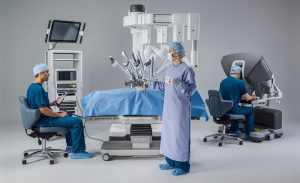 Robotic gastrectomy can treat gastric adenocarcinoma, the most common form of stomach cancer, especially for obese patients and those with smaller tumors, Obese patients require large incisions during traditional surgery, so the difference in incision sizes between open and robotic surgeries is the greatest for larger patients, Since the resected tumor and surrounding stomach should be removed through an incision, the benefits of robotic surgery are diminished for a very large tumor or for a total gastrectomy (complete removal of the stomach), as these may require enlarging one of the initial, smaller incisions.

Traditional, open gastrectomy and laparoscopic gastrectomy are the main alternatives to robotic gastrectomy, but the ultimate decision depends on the nature of the tumor being removed, the patient preference, and the surgeon’s skill level.

Robotic gastrectomy, the removal of part or all of the stomach is a treatment for patients with operable gastric cancer, With robotic gastrectomy, the surgeon can remove stomach tumors without taking out too much of the stomach wall such as gastrointestinal stromal tumors (GIST), as well as perform more accurate removal of abdominal lymph nodes to be analyzed for cancer cells.

While the length of operation is longer for the robotic procedure versus laparoscopic or traditional surgery, Robotic gastrectomy typically leads to quicker recovery time than other approaches. Other benefits include reduced pain, lower risk of infection or other complications, Less blood loss (fewer transfusions), Shorter hospital stays, Less scarring due to smaller incisions, and faster return to normal function (work and daily activities), Often offering better short-term surgical outcomes.

Robotic surgery is one of the most effective treatment options for stomach cancer, Combining the benefits of minimally invasive surgery, such as faster recovery times and less scarring (as compared to traditional surgery), with an enhanced level of operative precision, robotic surgery presents a number of potential benefits to patients whose stomach cancer treatment plans include surgery.

The latest minimally invasive robotic surgery techniques further refine foregut surgery, robotic surgery is more exact, due to a greater range of motion and stability and a magnified view of the surgical field, the main benefits of the robotic system are represented by better ergonomic surgeon position and deeper high-definition 3D vision.

The robot does not perform the surgery; rather, the robotic system is a tool the surgeon uses to complete the operation, The surgical robot’s arms are positioned where needed in the patient’s abdomen, In robotic achalasia surgery, The surgeon releases the muscles around the sphincter, relaxing this valve and allowing food to pass into the stomach more easily, To prevent reflux after the procedure, the surgeon performs a partial wrap of the stomach around the esophagus.

The minimally invasive esophagectomy (MIE) technique was designed to reduce surgical trauma, resulting in lower mortality and morbidity rates, Robot-assisted, minimally invasive esophagectomy (RAMIE) facilitates the esophageal dissection with enhanced visualization of the three-dimensional fields, allowing the execution of complex maneuvers through the articulated instruments, including lymphadenectomy and visceral anastomoses.

The robotic interface helps the surgeon during dissection in deep and narrow spaces and for the knot-tying of vascular structures, The use of robotic instruments can resolve some life-threatening situations, such as a caval injury caused by the stapler malfunction.

The robot-assisted colon resection using the da Vinci Surgical System offers decreased conversion rates, with a higher rate of bleeding and increased costs observed. The minimally invasive techniques have transformed surgery in the past three decades, Robotic surgical systems can enhance the surgeon’s dexterity in the surgical field, and the robot can improve nondominant hand performance and reduce the need for extensive preemptive training in laparoscopic techniques.

The benefits of robot-assisted gastrointestinal surgery are appreciated during lymph node dissection, intracorporeal reconstruction, enlarged resections, and complex reconstructions, The better detection of vessels due to the greater field of view and the high precision of bleeding control can account for decreased blood loss in RS, The learning curve and reproducibility of RAS seem to be shorter and more feasible than with conventional laparoscopy.

Robotics can contribute to the standardization and widespread application of minimally invasive surgery for the treatment of gastric cancer, making it a routine approach even in patients with advanced stages of the disease.

There are risks as with any surgery associated with robotic gastrectomy, such as bleeding, infection, and reaction to anesthesia, The main limitations of robotic gastrointestinal are the longer operation times, including setup and organizational troubles, and unproven benefits for patients. The cost associated with robotic surgery was found to be higher than both traditional and laparoscopic surgery.