Digestion is the conversion of large food molecules ( polymers ) into smaller ones ( monomers ) by means of hydrolysis , This process is catalyzed by an enzymatic action .

The importance of digestion : The breaking down of large and complex food substances into a simpler and smaller molecules which are easily absorbed by the cells ( either by the diffusion or active transport ) , The cell will then use these simple compounds as a source of energy in the building of new tissues .

Enzymes is a protein substance which has the properties of catalyst and has the ability to activate a particular chemical reaction .

The enzyme‘s ability to activate a particular chemical reaction depends on the structure of reacting molecules ( reactants ) & the name of enzyme .

When the reaction is completed , the resulting molecules break away from the enzymes , leaving it in the same form as it was before the reaction .

Structure of the digestive system in man

Accessory ( Associated ) glands which are salivary glands , liver and pancreas . 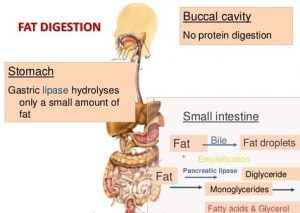 Mouth : The digestive canal starts with the mouth which contains teeth , tongue and salivary glands .

Teeth : that are differentiated into :

Tongue : helps to manipulate the food to be chewed by the teeth and it serves as an organ of taste .

Function of amylase : it catalyzes the hydrolysis of starch to disaccharide maltose .

Pharynx : It is a cavity at the back of mouth which leads to two tubes :

Swallowing process is an organized reflex action which pushes the food from the mouth to the oesophagus and during this , the top of trachea with the larynx is elevated together , causing the epiglottis to close over the glottis ( the entrance to air passage ) .

Oesophagus : It extends from the pharynx downward through the neck and into the chest cavity , It is about 25 cm long , It lies parallel to the vertebral column , It is lined with glands to secrete mucus , Food is carried through the oesophagus to the stomach by a phenomenon known as peristalsis .

Peristalsis : A series of rhythmical muscular contractions and relaxations of the circular muscles of alimentary canal to sweep any food contained within the canal , It is also responsible for churning the food and mixing it with the digestive juices .

Stomach secretes a gastric juice ( a colourless acidic liquid ) which consists of 90 % water , HCl acid , Pepsin enzyme which is secreted in an inactive form called pepsinogen .

Protein digestion : Pepsin catalyzes the hydrolysis of protein by breaking a certain peptide linkages in the long chain of protein to yield smaller fragments called polypeptides .

Proteins are the only food substances which are affected by the gastric juice , Although the stomach is made up of protein , the gastric juice does not affect the cells which line it , this due to the presence of mucus secretions which protect the cells against the effect of digestive enzymes , The presence of pepsinogen in an inactive form which is activated only when it is mixed with HCl in the cavity of stomach .