Robots serve many practical purposes, whether domestically, commercially, or militarily, Many robots are built to do jobs that are hazardous to people such as defusing bombs, finding survivors in unstable ruins, and exploring mines and shipwrecks, Robotics is used in STEM (science, technology, engineering, and mathematics) as a teaching aid.

Robotics means the branch of science & engineering, it involves mechatronics, artificial intelligence, mechanical engineering, electronic engineering, information engineering, computer science, nanotechnology and bioengineering, It can deal with the design, construction, operation & use of robots, as well as the computer systems for their control, sensory feedback & information processing.

Robots come with mechanical construction, frame or shape designed to achieve a particular task, They contain electrical components that power & control the machinery, They have some level of computer programming code, The program is how the robot decides when or how to do something.

The programs are very important to the robots, The robot contains excellent mechanical & electrical construction, but if its program is poorly constructed, its performance will be very poor (or it may not perform at all), There are three types of robotic programs which are the remote control, the artificial intelligence & hybrid. 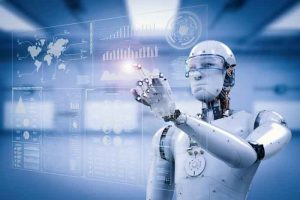 The robot that uses remote control programming comes with a preexisting set of commands, it will only perform when it receives the signal from the control source, typically the human being with a remote control, It is more appropriate to view devices controlled primarily by human commands as falling in the discipline of automation rather than robotics.

Hybrid is a form of programming that incorporates both AI & RC functions, The robots with the artificial intelligence can interact with their environment on their own without the control source, they can determine the reactions to the objects and problems they encounter using their preexisting programming.

Artificial Intelligence is the machines that are designed & programmed to act like a human, It becomes an important part of our daily life, It reduces human effort in many industries, It can speed up your process of doing work and give you an accurate & fast result, It is used in treating brain injuries, diseases, in communication technology & computer simulations, It plays a very important role in the development of business and processes.

Artificial intelligence is used in medical science and it can create a virtual personal health care assistant, Al system is used in research & analysis purposes, Many efficient healthcare bots can be introduced in the medical field to provide constant health support and assistance, 24/7 to patients, The bots are used in answering the frequent questions, and also to schedule appointments in quick succession.

Artificial intelligence is used in heavy industries, It is used in the production unit in most big manufacturing companies, It is used to give a specific shape to an object, move objects from one place to another, etc, It is used in the management of most companies to get their tasks efficiently done on time, The data of the company is stored & it can be easily extracted at decision-making time.

AI system is used in Air transport, There are many functions in the machines & management processes that are controlled by the AI, There are many features such as booking the tickets, the takeoff and operation of the flights that AI takes care of, AI applications make air transport efficient, fast, safe, and offers a comfortable journey to the passengers.

Artificial Intelligence is used in Gaming, video games have advanced by offering gaming bots who can act and play like real players & offer a great entertainment, you can get the game started without waiting for other players to play with you, You can play TV & computer games on a whole new level due to Artificial intelligence application.