The stomach cancer is cancer which occurs in the stomach, It is the muscular sac that located in the upper middle of your abdomen below your ribs, The stomach receives and holds the food you eat and helps to break down and digest it then moving the nutrients along to the rest of your digestive organs.

The stomach cancer begins when the cancer cells form in the inner lining of your stomach, The cancer cells can grow into the tumor, Also they are called the gastric cancer, The disease usually grows slowly over many years, It doesn’t cause any symptoms until the later stages, so, It is not diagnosed until it is more advanced.

Most cases of stomach cancers are the gastric carcinomas, It can be divided into a number of subtypes, Lymphomas and mesenchymal tumors may also develop within the stomach. 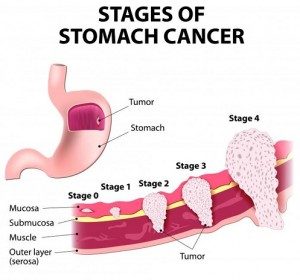 The scientists don’t know exactly what makes the cancer cells start growing in the stomach but there are a few things which can raise your risk for the disease, The most popular cause is the infection by the bacterium Helicobacter pylori which cause ulcers, and certain types of H. pylori have greater risks than others.

The Inflammation in your gut called gastritis, long-lasting anemia, The growths in the stomach called polyps also can make you more likely to get cancer, Between 1% and 3% of cases are due to the genetic syndromes inherited from the person’s parents such as the hereditary diffuse gastric cancer.

There are many things that play a role in raising the risk such as smoking, Being overweight or obese, A diet high in smoked, The pickled, or the salty foods, The stomach surgery for an ulcer, Type-A blood, Epstein-Barr virus infection, Working in the coal, metal, the timber, or the rubber industries, and the exposure to the asbestos.

The people don’t know anything about cancer until it has reached an advanced stage, The early symptoms include the frequent heartburn, the upper abdominal pain, nausea, and the appetite loss ( sometimes accompanied by the sudden weight loss).

There are later signs and symptoms such as jaundice (a yellowish discoloration in the eyes and skin), nausea/vomiting, difficulty swallowing, and the blood in the stool among others.

Some of the most popular symptoms of the advanced stomach cancer are indigestion, the constant bloating, early satiety (You feel full after eating only the small amount), but having indigestion or the heartburn after the meal does not mean you have cancer.

As the stomach tumors grow, you may have more serious symptoms such as the stomach pain ( which may be worse after the meals), the excessive fatigue, trouble swallowing, Swelling in the stomach, constipation or diarrhea, and the weakness or feeling tired.

The symptoms of gastric cancer include Melena or the pallor from anemia, Hematemesis, Palpable enlarged stomach with the succussion splash, The enlarged lymph nodes such as Virchow nodes and Irish node (anterior axillary).

The stomach cancer is directly linked to the tumors in the stomach, The risk factors include certain diseases and conditions like lymphoma (a group of blood cancers), H. pylori bacterial infections (the common stomach infection which can lead to the ulcers), and the tumors in other parts of the digestive system.

These risk factors include the stomach polyps (the abnormal growths of tissue that form on the lining of the stomach), The stomach cancer is more popular among older adults (usually those 50 years and older), men, the smokers, those with a family history of the disease.

The certain lifestyle factors can also play a role, You may be more likely to get the stomach cancer when you eat a lot of the salty or processed foods, if you eat too much meat, when you have a history of alcohol abuse, If you do not exercise, and don’t store or cook the food properly.

Since the people with stomach cancer rarely show the symptoms in the early stages, the disease is not diagnosed until it is more advanced, To make the diagnosis, your doctor will first perform the physical exam to check for any abnormalities, He may order the blood test, including a test for the presence of H. pylori bacteria.

The tests may include the upper GI endoscopy (a procedure which uses the small camera on the end of a thin, flexible probe to look at the esophagus and the stomach), the biopsy (tissue sample), the imaging the tests such as CT scans and X-rays.

The stomach cancer is difficult to detect but the treatment for stomach cancer is possible through the chemotherapy, the radiation therapy, and the surgery, the immunotherapy such as vaccines and medication, The exact treatment plan will depend on the origin and stage of cancer, the age and overall health can also play a role.

The goal of treatment is to prevent the cells from spreading the stomach cancer when left untreated, It may spread from the stomach to the other parts of the body particularly the lungs, the bones, and the liver,  lining of the abdomen and lymph nodes.

You can lower the risk of developing all the cancers by maintaining healthy weight, eating the balanced, low-fat diet, quitting smoking, and exercising regularly.