Sophia robot is a realistic humanoid robot, It can display human-like expressions and interact with people, It is designed for research, education, and entertainment, It helps promote public discussion about AI ethics and the future of robotics. Sophia is an artificially intelligent (AI) human-like robot developed by Hong Kong-based humanoid robotics company Hanson Robotics. she is the main attraction to how artificial intelligence can be used to benefit humanity.

Sophia is created by Hanson Robotics, It is the most advanced human-like robot, It can personify our dreams for the future of AI, As a unique combination of science, engineering, and artistry, She is a human-crafted science fiction character depicting the future of AI & robotics, and a platform for advanced robotics & AI research.

Sophia is a social humanoid robot, It was activated on February 14, 2016, It made her first public appearance at the South by Southwest Festival (SXSW) in mid-March 2016 in Austin, Texas, United States, Sophia robot can display more than 60 facial expressions. but no Artificial Intelligence is nearly as smart as a human.

Sophia robot participated in high-profile interviews, In October 2017, Sophia became a Saudi Arabian citizen, the first robot to receive citizenship from any country, In November 2017, Sophia was named the United Nations Development Programme’s first-ever Innovation Champion and she is the first non-human to be given any United Nation title and she has been covered by media around the globe. 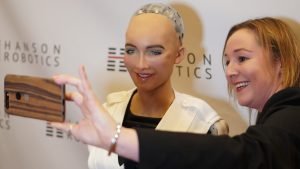 Sophia is considered the first robot Innovation Ambassador for the United Nations Development Programme, She is the world’s first robot citizen, She is a household name, with appearances on the Tonight Show and Good Morning Britain, in addition to speaking at hundreds of conferences around the world.

Sophia robot has gripped the public imagination with its interesting and fun appearances on TV and on high-profile conference platforms, Sophia robot is not the first show robot to attain celebrity status, Yet accusations of hype & deception have proliferated about the misrepresentation of AI to the public and policymakers alike.

The biggest problem with the hype surrounding Sophia is that we have entered a critical moment in the history of AI where informed decisions need to be made, AI is sweeping through the business world and being delegated decisions that impact on people’s lives from mortgage and loan applications to job interviews, prison sentences, and bail guidance, to transport and delivery services to medicine and care.

Sophia can be used for AI project, that seeks to understand how robots can adapt to users’ needs through interpersonal development, Sophia robot is a framework for cutting-edge robotics & AI research, particularly for understanding human-robot interactions and their potential service and entertainment applications.

Artificial General Intelligence (AGI) can be referred to as strong AI, full AI, or general intelligent action, where human-level intelligence is attained, Sophia is not remotely close to that, AGI may indeed be nearby and viable. Sophie had reached a point of personhood or semi-sentience (if there can be semi-in-sentience) that brought out leaders in the field of robotics and AI to protest.

Sophia robot uses voice recognition (speech-to-text) technology from Alphabet Inc. (parent company of Google), it is designed to get smarter over time, Her speech-synthesis ability is provided by Cereproc’s Text-to-Speech engine & allows her to sing, Sophia‘s intelligence software is designed by Hanson Robotics, The AI program can analyze conversations & extracts data that allows it to improve responses in the future.

Sophia‘s eyes use cameras that are combined with computer algorithms and allow her to see, Sophia robot can follow faces, sustain eye contact, and recognize individuals, Sophia can process speech & has conversations using a natural language subsystem, Around January 2018, Sophia was upgraded with functional legs & the ability to walk.

Sophia is similar to the computer program ELIZA, which was one of the first attempts at simulating a human conversation, The software of Sophia robot has been programmed to offer pre-written responses to specific questions or phrases, such as a chatbot, These responses are used to create the illusion that the robot can understand the conversation, including stock answers to questions, The information is shared in a cloud network which allows input & responses to be analyzed with blockchain technology.

Sophia robot can be used to serve in healthcare, customer service, therapy & education, Sophia robot runs on artificially intelligent software that is constantly being trained in the lab, so her conversations can be faster, Sophia‘s expressions can be with fewer errors, and she has to answer complex questions with more accuracy. Sophia robot learned how to draw in 2019 for 7 months in collaboration with an artist who teaches AI to draw named Patrick Tressett, Public figure.

Sophia can be used for the elderly at nursing homes or she can help crowds at large events or parks, Sophia robot can interact with other humans sufficiently to gain social skills, she comes with at least nine robot humanoid “siblings”, Fellow Hanson robots are Alice, Albert Einstein Hubo, BINA48, Han, Jules, Professor Einstein, Philip K. Dick Android, Zeno, and Joey Chaos, Around 2019–20, Hanson released “Little Sophia” as a companion that could teach children how to code, including support for Python, Blockly, and Raspberry Pi.

Sophia‘s software has deep neural networks that allow the robot to discern someone’s emotions from their tone of voice and facial expression and react in kind, Sophia robot can mirror people’s postures, and her code generates realistic facial movements, Hanson has patented the flexible rubber skin that covers Sophia’s face.

Sophia‘s Artificial Intelligence uses cutting-edge machine perception that allows her to recognize human faces, see emotional expressions, and recognize various hand gestures, she can estimate your feelings during a conversation, and try to find ways to achieve goals with you.

Sophia has IK solvers and path planning for controlling her hands, gaze, and locomotion strategy, her walking body performs dynamic stabilization for adaptive walking over various terrain. As AI components can be combined in different ways, the responses can be unique to any given situation or interaction.

Sophia becomes very desirable, Sophia robot comes with some face recognition capability and a chatbot engine, but Sophia appears to either deliver scripted answers to set questions or works in simple chatbot mode where keywords trigger language segments, sometimes inappropriate, and sometimes there is just silence.

There are no robots that have achieved artificial general intelligence (AGI) or versatile humanlike smarts, When talking with journalists, Sophia robot can recall the self-aware robots in Ex Machina or Westworld, Sophia robot replies by prewritten trees of responses like a chatbot, When giving a speech.