Robots at the workplace offer a high degree of accuracy, Robots can be used in chemical industries, chemical spills, nuclear plants and so on, They help in reducing the company loss by working in dangerous environmental conditions like polluted environment, in collection and cleaning of radioactive waste. Robots can repeat the tasks any number of times in a day without getting tired.

Advantages of Robots in the Workplace

Robots are cheaper than humans and their cost is now decreasing, if you run an essay writing service, you can use robots to perform every kind of research related to any subject. Robots are more active and don’t get tired like humans, the collaboration between humans and robots can reduce absenteeism, The pace of humans can’t increase hence robots are helping humans.

Robots are stronger & faster than humans, they are more precise than humans, they don’t tremble or shake as human hands, Robots have smaller and versatile moving parts which help them in performing the tasks with more accuracy than humans, Robots come in any shape and size, depending upon the need of the task.

They can work in any environmental condition whether it is space, underwater, in extreme heat or wind, etc, They can be used everywhere where human safety is a huge concern, they are programmed by the human; they can be used for any dangerous and unwanted work where humans may deny to offer their services, many robotic probes have been sent into space but have never returned. 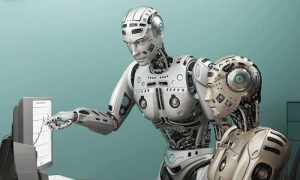 Robots in warfare have proven to be very successful, they can save more lives, They never get tired and can literally work on certain tasks 24 x 7, The human brain gets tired and requires rest, unlike robots, Robots work on certain tasks without making any mistake which is the best thing about them. They work with a similar velocity the whole day and unlike human beings, and their energy never fades away.

The work is done in a collaboration which reduces the time of the worker up to 85%, The collaborative robots are deployed in the lightweight task to assist the workers, holding the parts for the operators and applying the fasteners to the manufactured products.

More products are manufactured in less time, Robots can work faster than humans and this results in more finished products than what could be done manually, they help to increase the production, the production of the defective good decreases; producing similar quality products in less time and more accuracy.

Robots are flexible in working, They can work in adverse conditions, but this could not be done by the human, So, the place where the human has no reach, the robots are used, send and the task is accomplished. So, they are flexible in every situation.

Disadvantages of Robots in the Workplace

The robots need people for monitoring & supervision, they can’t do everything, Some jobs need to be completed by the human, If your human employees aren’t caught up doing the things that could be left for robots, they’ll be available & productive, They can talk to customers, answer emails & social media comments, help with branding and marketing, and sell products.

The poor labours get no work to do, so, they get poorer, the owners get the work in no time, with increased productivity & more efficiency, making them richer day by day. Robots don’t have a sense of emotions or conscience, They lack empathy, Robots can handle their prescribed tasks, but they can’t handle unexpected situations.

Robots can be a danger, This is because no one can trust a robot as it does not have a human brain which can think before doing anything, Whatever is fed to the robots through chips is performed if it goes wrong. Once the machine damages, the whole company can come under chaos.

The cost of affording robots is very high, Buying the robots and the robotic machines is not a child’s play, Not every company can afford the same, So, the ones who can afford is a boon for them, but those who can’t buy has to face the stiff competition. That lags them behind, getting no place in the market. Maintenance of the machines cost more than its installation, and this can’t be afforded by all companies as the profits are not always raining incessantly.

Financial budget increases than expected, So, it puts the company in great financial issues leading the company to be bankrupt, which is a huge unbearable loss for any company, the maintenance cost of the robot is high, When the company itself is reeling under the pressure of the financial crisis, then how can the company be expected to maintain the robotic machines, It isn’t possible.

The high cost is needed to train employees with robots, if the robots are ruling the work in many places, the labour is needed to assist them, because the whole work can’t be thrown in the ability of the robots, So, the employees need training and that involves cost, So, a lot of money is involved with the installation of machines in the workplace.

If Robots can’t do something for which they are not designed to do, they can produce a lot of electrical waste, the waste produced by the robots can’t be used anywhere which is a huge loss, Robots can make the people lazy, which is neither good for the company nor for the employees.

Robots come with higher expenses than humans, they may have AI but they are not as intelligent as humans, They can’t improve their jobs outside the pre-defined programming because they simply can’t think for themselves, Robots installed in workplaces still require manual labour attached to them, Training those employees on how to work with the robots definitely has a cost attached to it.

Artificial intelligence in pharmacy, and will pharmacists be replaced by robots?