Robots can be used in the workplace, they are currently working in almost every field like medical, non-medical, mechanical, documentation and many others, Robots offer high quality, they’re programmed for precise, repetitive motion, they’re less likely to make mistakes, Robots are simultaneously an employee and a quality control system, they can eliminate the human error, and they will create a predictably perfect product every time.

Robots in the Workplace

Robots in the workplace offer safety, Heavy machinery that runs at hot temperatures & sharp objects can easily injure the human being, Robots can do dangerous tasks and they can remove some of the risks. The work of robots don’t depend on the work of other people, They won’t have unexpected emergencies, they won’t be relocated to complete a different time-sensitive task, and they’re doing what they’re supposed to do.

Robots don’t take vacation time or leave an hour early, they don’t take breaks, They don’t feel stressed out and start running slower, They don’t need to be invited to employee meetings or training session, They can work all the time, and this speeds up the production, Robots can prevent the employees from overworking themselves to meet high-pressure deadlines or impossible standards.

Automation is more reliable than human labor. Robots can perform tasks that people don’t enjoy, such as menial work, repetitive motion, or dangerous jobs, so, the employees will be focusing on more engaging work that’s less likely to grind down their nerves.

There are many types of robots that are used in varied industries, The robots are used in companies and other fields, Without robots, the work may get a slow pace but would certainly not come to a standstill as without them also, the work was being done in the past decades. 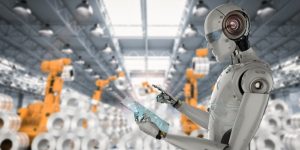 Robots in the Workplace

Types of Robots in the Workplace

Robots are used in the field of the army, Although the soldiers are not replaced with Robots, Drones and other machines are used to combat the missions, One of the best examples is MAARS Robots, Robots were equipped with the GPS monitor which can be programmed to look at the fire and no-fire zones, also to open the doors and to bring out the human bodies, So, Robots are used in the war zone in an efficient manner.

You may be given a prescription by the robots and not the doctors, The UCSF medical centre has recently launched a robotics controlling lab at two hospitals, If the robots receive the order from the physicians or the pharmacist, they will pick the dose, package them and hand over it to the individual, So, this way the robots would help in doing the work at a fast pace.

Not only the manufacturing hub but the writers use the software which is no less than the robots themselves, there are some machines which generate stories, they are less expensive & more accurate, Many reporters use machine-generated stories as it not only saves their time but also helps in doing work with a fast pace.

Robots can do a great job within no time and at less cost, if you don’t want to pay to the army of lawyers to have a look at the documents, the software can help in analyzing approximately 1.5 million documents that are less than the cost otherwise incurred. The legal staff can get tired easily, get headaches & get bored of reviewing the documents on a daily basis, but the computers neither get bored, tired or a headache.

Robots can be used by astronauts in the space, The NASA’s robonaut is the best example of using Android technology, It is highly equipped with many sensors that help to do all the menial jobs just such as cleaning, assisting the humans in space work and so on.

Artificial intelligence in pharmacy, and will pharmacists be replaced by robots?