All of the cancer symptoms metastasis depend on the location of the tumor, When cancer begins, It invariably produces no symptoms, The signs and symptoms only appear as the mass continues to grow or ulcerates, The mass effects from the lung cancer can cause the blockage of the bronchus resulting in the cough or the pneumonia.

Esophageal cancer can cause narrowing of the esophagus, So, it is difficult or painful to swallow, and colorectal cancer may cause the narrowing or blockages in the bowel, resulting in changes in the bowel habits , The masses in the breasts or the testicles may be easily felt, Ulceration can cause bleeding that.

If it occurs in the lung, It will lead to coughing up the blood, in the bowels to the anemia or the rectal bleeding, in the bladder to the blood in the urine, and in the uterus to the vaginal bleeding, Although the localized pain may occur in advanced cancer, the initial swelling is usually painless, Some cancers can cause a buildup of fluid within the chest or abdomen.

The general symptoms occur due to the distant effects of cancer such as the unintentional weight loss, the fever, being excessively tired, and changes in the skin, The Hodgkin disease, leukemias, and the cancers of the liver or kidney can cause a persistent fever of unknown origin, Some cancers may cause specific groups of systemic symptoms, termed paraneoplastic phenomena such as the appearance of myasthenia gravis in thymoma and clubbing in lung cancer. 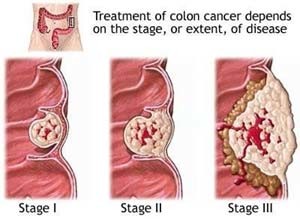 The different stages of cancer

There is a limitless number of cell divisions, There is the promoting blood vessel construction, There is the tissue invasion and the metastases formation, The changing from the normal cells to the cells that can form the detectable mass to outright cancer involves many steps known as the malignant progression.

In stage 0 (situ cancer), The cell which becomes the cancer cell usually does so in the company of other similar cells but not always, it can produce the tumor in that tissue, in a way that poses little or no threat to life, It is called the situ cancer, cancer in the position where it started, and some cancers never go beyond this early stage.

In stage 1 (localised cancer), In the next stage, the cancer cells gain the ability to pass through the basement membrane in which cancer began, and to invade the neighbouring tissue, that invasion is the serious step as it indicates that the growing cancer cells may threaten the life, It is said to be in the localised stage, the cancer is relatively small and contained within the organ it started in.

In stage 2 and 3 (the regional spread), When the cancer cell has invaded, The common next step is for one of its daughter cells to invade through the lymph vessel (The vessel such as the blood vessel that carries the clear fluid called the lymph that is all the time exuding into the tissue from our blood capillaries, back to the bloodstream).

On the way to the bloodstream, the cancer cell can get caught in the lymph node, one of the powerhouses of the body’s immune system,There it might provoke the immune response against it that can go on to destroy it and the other cancer cells, though, it divides and forms the lump in the lymph node, This stage is known as the regional spread.

In stage 4 (the distant spread), The next step can be quite varied, The cells from the lump in the lymph node can spread through the lymph vessels to the distant lymph nodes or into the bloodstream, Or the cells from the original lump can invade the capillary and enter the bloodstream that way, when the cancer cells can go just about anywhere in the body, form the new colonies and spread further, It is the stage of the distant spread.