The kidneys are two bean-shaped organs, each about the size of a fist, They are located below the rib cage, one on each side of your spine, The kidneys are powerful chemical factories that remove waste products from the body, they remove drugs from the body, they can balance the body’s fluids, they can release hormones that regulate blood pressure, and they can control the production of red blood cells.

Functions of the kidney 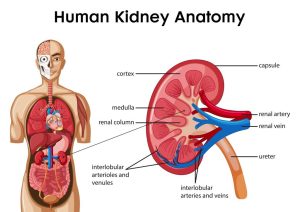 The kidney maintains the constancy of the internal environment through the excretion of urine, Urine contains excess water, electrolytes, acids, and alkalis, Moreover, it contains the waste products of metabolism, so, the kidney plays an important role in:

III. Metabolic function of the kidney

The energy supply of the kidney

The kidney tissue represents less than 0.5 % of the body weight; it receives 25 % of the cardiac output and 10 % of O2 consumption, this is required for the synthesis of ATP needed to reabsorb most of the solutes filtered through the glomerular membranes. The energy reserves in the kidney (glycogen, phosphocreatine or neutral lipids) are very low, thus the kidney must get its energy requirement from circulating substrates.

Substrates used by the kidney for energy production: In the fed state, the kidney mainly oxidizes lactate (33% of total renal O2 consumption) and glucose. While during starvation, there is a decrease in blood lactate and glucose concentrations and an increase in blood ketone bodies and fatty acids concentrations, so the renal uptake of ketone bodies and fatty acids increases, they appear to be the major kidney fuel during starvation.

A) Carbohydrate metabolism in the kidney

Role of the kidney in glucose homeostasis

Regarding glucose homeostasis, the kidney can be considered as 2 organs:

This occurs due to the differences in the distribution of various enzymes in the renal medulla and renal cortex, In the renal medulla, the cells have considerable glucose-phosphorylating enzymes (hexokinase), glycolytic enzyme activity and depend on glucose as a major source of energy.

The cells don’t have glucose-6-phosphatase and other gluconeogenic enzymes, Thus cells of the adrenal medulla can take up, phosphorylate and metabolize glucose through glycolysis; they can form glycogen, but cannot release free glucose into the circulation.

In the renal cortex, the cells have gluconeogenic enzymes, have little phosphorylating enzymes, cannot synthesize appreciable concentrations of glycogen under normal conditions, So, we can say that the release of glucose by the normal kidney is exclusively, a result of renal cortical gluconeogenesis, The most important substrates for renal gluconeogenesis are glutamine and lactate, followed by glycerol, while alanine is preferentially used by the liver.

After meal ingestion, glucose is mainly utilized by the brain, liver & muscles, There is a decrease in liver gluconeogenesis. Renal glucose uptake is < 10% of the ingested glucose, Renal gluconeogenesis paradoxically increases and it accounts for 50% of the endogenous glucose release, This may take place due to:

Epinephrine: it has more effect on renal gluconeogenesis than hepatic gluconeogenesis (may be due to the rich autonomic innervation of the kidney). The mechanism is mediated through free fatty acids released during lipolysis accompanying hypoglycemia.

B) Lipid metabolism in the kidney

The kidney has an active glycerol kinase enzyme, It is a site for:

C) Protein metabolism in the kidney

The kidney is a site for:

D) Other Metabolic Functions of the Kidney

Ammonia production in the kidney: Ammonia is produced in the renal tubules by the action of the enzyme glutaminase and L- glutamate dehydrogenase. lt combines with H+ to form ammonium ions: NH3+↔ H+ NH4+.

This reaction is favored at the acid pH of urine, The formed NH4+ in the tubular lumen cannot easily cross the cell membranes and is trapped in the lumen to be excreted in urine with other anions such as phosphate, chloride, and sulphate. NH4+ production in the tubular lumen accounts for about 60 % excretion of hydrogen ions associated with nonvolatile acids, In renal insufficiency, the kidneys are unable to produce enough NH3 to buffer the nonvolatile acids leading to systemic acidosis.