1G technology was first used in Japan & spread quickly to the other parts of the world , 2G & 3G technology has built on the phenomenon of 1G technology , and although these later generations of technology are more effective , 1G technology provided the greatest scientific breakthrough .

1G wireless technology used the analog radio signals , Through 1G network , The voice call gets modulated to a higher frequency of about 150MHz and up as it is transmitted between the radio towers , This is done using a technique called Frequency-Division Multiple Access ( FDMA ) , Main difference between the two mobile telephone systems ( 1G and 2G ) , is that the radio signals used by 1G technology is analog , while 2G technology is digital .

Both systems use digital signaling to connect the radio towers ( which listen to the handsets ) to the rest of the telephone system , but the voice is encoded to the digital signals in 2G network during the call whereas 1G network is only modulated to higher frequency , typically 150 MHz & up , The inherent advantages of digital technology over that of analog meant that 2G technology replaced them almost everywhere . 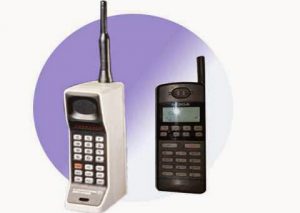 However , 1G network offers a few advantages over 2G technology , In comparison to 1G’s analog signals , 2G’s digital signals are very reliant on location and proximity ,  If the 2G handset made a call far away from a cell tower , the digital signal may not be strong enough to reach it .

1G cell Phones used the first successful standard network technology , The price of 1G mobile phones fell as demand slacked off with new , high-tech 2G phones on the market , This marked the beginning of mobile phones that were affordable to a large number of middle-class users .

The cell phone networks were intended for the industrial , military & research applications , They used a series of dissimilar networks with very small broadcast areas , The idea of the universal network that started with 1G persists in today’s worldwide digital networks .

Compared to the earlier phones , that required wired connections to the telephone network , 1G phones gave the users true mobility for the first time , allowing the people to take the phones outdoors & in the cars , Though bulky by modern standards , most 1G mobile phones were comparable in size to the standard telephone handset .

1G mobile phones which the service providers marketed directly to the individual users , Because of their cost , the phones were aimed at high-end consumers such as the executives & very wealthy , However , these customers required standardized monthly bills based on consistent service rates .

The main drawback of 1g technology is that it uses analog signals rather than digital signals , This is a less effective means of transmitting information , It is slower , and the signals can not reach as far in terms of secluded areas and such 2G and 3G signal is far more widespread .

The analogue signals are more likely to suffer interference problems , It makes the use of the mobile phone with the analog signal more difficult , the newer brands of 2G and 3G technology are more highly recommended , 1G mobile phones appears bulky and awkward by modern standards .

1G technology compares unfavorably to its successors in terms of the overall connection quality , It has low capacity , unreliable hand off , It offers poor voice links , It has no security at all since the voice calls were played back in the radio towers , So , these calls are susceptible to the unwanted eavesdropping by the third parties .