Sony Xperia Tablet Z has thin, attractive, and light design with top-notch performance, It very flat and light, It is dust and water-resistant, it has LTE connectivity, It has high performance, It has many wireless communication options, It has appealing display despite the device’s preseries status, It has a good looking screen with wide viewing angles, It has useful software features and the battery stamina.

Sony Xperia Tablet Z  has a sharp and bright full-HD display, It has blazing fast performance, It has built-in IR emitter for home theater remote control, It has a MicroSD card slot and HDMI out through MHL.

The user interface is clean with minimal alteration of the android, The display is sharp and the touch interfaces responsive, The connectivity has been excellent, and it has excellent build quality.

You can charge by using a micro USB connection, So, You can use any other chargers you have lying around the house too, and it has MHL micro USB 2.0. 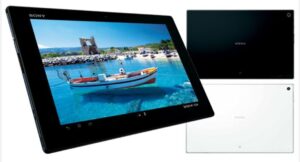 Sony Xperia Tablet Z has dual-band Wi-Fi 802.11 a/b/g/n Wi-Fi Direct, Wi-Fi hotspot, It has Stereo Bluetooth v4.0, It has the accelerometer, the gyroscope, and the magnetometer, It has many apps, They are easily removable, It has PlayNow, Wi-Fi checker, and Garage.

Sony Xperia Tablet Z has pretty much complete package, A fantastic slender, lightweight design with a great screen, and clever features which makes it the best 10-inch Android around.

Sony Xperia Tablet Z  has an older version of Android, It has a weak front camera, The speakers crackle at full volume, The display is a little warm, and it is middle of the road stability.

Sony Xperia Tablet Z  is a dust, lint and fingerprint magnet, Annoying plastic flaps cover connection ports, It has a high starting price, Its CPU and displays not quite cutting edge, and it has a decidedly average rear camera.

Sony Xperia Tablet Z  has repair problems, It has poor battery life, It has 6,000mAh battery, It has cheap build quality, and it has poor customer support, The rear camera on the tablet has a small lens which makes it difficult to correct the frame photos.

Sony Xperia Tablet Z Screen has poor outdoor visibility, The audio output quality is not on par with other tablets on the market, and it uses a previous generation chipset, slightly slower than the current best.