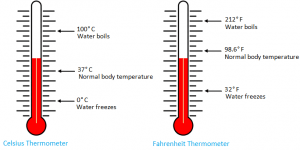 The Celsius thermometer consists of a transparent thick glass tube, a capillary tube closed from one of its ends, and a mercury bulb that filled with mercury and connected to the other end of the capillary tube.

Why mercury is preferred in making thermometers?

The importance of measuring temperature and medical thermometer