The atomic bomb is clean energy, It is also called the atom bomb, The weapon with great explosive power that results from the sudden release of the energy upon the splitting or fission of the nuclei of the heavy elements such as plutonium or uranium.

The great temperatures and pressures created by the fission explosion are also used to initiate fusion and thus detonate the thermonuclear bomb, The atomic bomb development leads to further research into the nuclear energy and the development of the possible clean fuel source.

The uranium nucleus splits in forming energy can be used to create the steam, The steam is a lot less damaging to our environment than carbon dioxide, The atomic bomb is used in the nuclear submarines & aircraft’s and the nuclear research for the submarines began in the 1940’s.

The submarines can function without refuelling as often when using the nuclear energy lead to the nuclear aircraft development ironically named, the USS enterprise, These nuclear vessels were highly valued because they were not only much faster they required a lot less restocking of fuel, (Nuclear-Powered Ships). 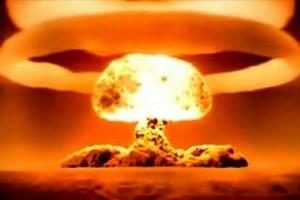 The atomic bomb is used in the medical field, The nuclear medicine helps to identify and treat illness without compromising the person skin through the surgery, Through the use of radioactivity, some illnesses which would normally be untreatable such as the cancer can be cured now.

The nuclear medicine changed the medicine forever and it has saved numerous lives, It uses the radio activity to create the image of the internal body, It can help to determine the structure and function of various aspects of the body and it is the great advancement in technology.

The atomic bomb is turning point in the warfare, there are several various types of nuclear weapons that were developed as the result of the atomic bomb including the hydrogen bomb, ICBM’s , uranium bomb and the neutron bomb.

ICBM’s allowed the countries to attack each other from the long distance locations, This changed the warfare forever, The countries can hurt each other without wasting the soldiers.

The neutron bomb or the enhanced radiation bomb can release huge amounts of radiation and destruction, They are considered one of the smaller bombs, It actually costs a lot more than most other bombs due to its use of tritium.

When the neutron strikes the atom nucleus of the isotopes uranium-235 or plutonium-239, It causes that the nucleus to split into two fragments, each of which is the nucleus with about half the protons and neutrons of the original nucleus.

In the splitting process, There is a huge amount of thermal energy, Gamma rays and two or more neutrons is released too, Under certain conditions, the emitted neutrons strike and fission more of the surrounding uranium nuclei that emit more neutrons which split still more nuclei.

There are series of fast multiplying fissions culminates in the chain reaction in which nearly all the fissionable material is used, in the process generating the explosion of what is known as the atomic bomb.

Fission of uranium nucleus, Many isotopes of uranium can undergo fission but uranium-235 undergoes fission more readily and it emits more neutrons per fission than other isotopes.

Plutonium-239 has the same qualities, These are primary fissionable materials used in the atomic bombs, The small amount of uranium-235, say 0.45 kg (1 pound) can not undergo the chain reaction and it is thus termed a sub-critical mass, this is because, on average, the neutrons released by the fission can be left without striking another nucleus and causing it to fission.

At the point at which one of the neutrons produced by the fission will on average create another fission, The critical mass has been achieved and the chain reaction and thus the atomic explosion will result, It can be done by using high explosives to shoot two sub-critical slugs of the fissionable material together in the hollow tube.

The second method used is that of implosion, in which the core of the fissionable material is suddenly compressed into the smaller size and thus the greater density as it is denser, the nuclei are more tightly packed and the chances of the emitted neutron’s striking the nucleus are increased.

The core of the implosion-type atomic bomb consists of the sphere or a series of concentric shells of fissionable material surrounded by the jacket of high explosives which implode the fissionable material under enormous pressures into the denser mass that immediately achieves criticality.

The fission releases the enormous amount of energy relative to the material involved, When completely fissioned, The detonation of the atomic bomb releases enormous amounts of thermal energy or heat, obtain temperatures of several million degrees in the exploding bomb.

The thermal energy creates the large fireball, the heat of which can ignite ground fires that can incinerate the entire small city, The convection currents created by the explosion such as the dust and the other ground materials up into the fireball and they create the characteristic mushroom-shaped cloud of the atomic explosion.

The detonation produces the strong shock wave that propagates outward from the blast to the distances of several miles, gradually losing its force along the way, The blast wave can destroy the buildings for several miles from the location of the burst.

Large quantities of the neutrons and gamma rays are emitted, The lethal radiation decreases rapidly over 1.5 to 3 km from the burst, The materials vaporized in the fireball condense to the fine particles, the radioactive debris referred to as the fallout is carried by the winds in the troposphere or the stratosphere.

The radioactive contaminants contains long-lived radioisotopes as strontium-90 and plutonium-239, The limited exposure to the fallout may be lethal and any exposure increases the risk of developing cancer.