The big risk is involved in operating the nuclear power plant, The energy that is generated can be harnessed to make devastating weapons such as the nuclear bomb, The plants pose the great risk, if the accidents occur, the entire plant could explode, injuring and possibly even killing many people.

The nuclear fission produces the radiation that is deadly for the humans and the animals if absorbed in large doses, The people that work in the nuclear power plants are at great risk of developing serious health conditions and suffering from the radiation poisoning.

There are extremely initial costs, The amount of money which is taken to build the nuclear fission power plant is insane because all of the complex technologies that are needed and the extreme safety measures which should be built into the nuclear plant to maintain the surrounding areas to be safe.

There are expensive construction costs, The facilities, the experts and the scientists which are needed to successfully run the nuclear fusion plant are very expensive and it costs much money to harness the energy that is created. 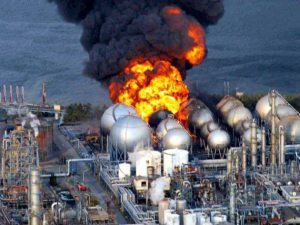 There are many risks for the contamination, When the proper procedures are not taken to dispose the nuclear waste properly, many people could be put at great risk, The water supplies will be contaminated and the widespread illness will be occurred.

The terrorists want to target the places which would cause the most widespread damage, The nuclear fission power plants are the biggest targets for these attacks, Even the small bomb or explosion can cause major problems with the nuclear power plants and it may explode them.

An extremely high levels of heat are necessary to fuse the two nuclei of the atoms together, This requires the large amount of energy, nearly as much energy as will be produced, So, The nuclear fusion energy is truly not plausible, The temperature should be between 10 and 15 million Kelvin (K) to fuse the atomic nuclei.

The nuclear fusion is the very new form of the energy, The only way it would be truly usable on the large scale production is if cold fusion was perfected, which is the long ways off, The full scope of dangers and the effects of nuclear fusion energy isn’t understood yet because it simply has not been around long enough.

Disadvantages of Dropping the Atomic Bomb

The Atomic Bomb resulted in the loss of life, The people died, whether it was during the bombing or after it, most of those who perished were civilians, The atomic bombs were considered the war crime.

Number of organizations have criticized the bombings as the war crimes, the crimes against the humanity and the state terrorism, It was the immoral act, Dropping the atomic bomb brings out different unwanted effects that affect the welfare of many individuals.

Thousands of innocent people died from the impact of the bomb, millions more where affected by the residual radiation, Much money is spent to develop and effectively test the atomic bomb, Many cities are completely destroyed from the firebombing.

We can not control of the harmful effects of the atomic bomb, the atomic bomb causes many human casualties & the devastation, Many persons received high radiation dosages died immediately or during the first day.