Transformation of Energy in the simple electric cell

If a potato is used instead of the lemon, The needle of the compass will deflect due to the production of the electric current, because a potato has a salt solution that has the same role of an acidic solution of lemon in completing the reaction.

Simple electric cell converts the chemical energy into electric energy, It consists of a glass container containing dilute sulphuric acid (H2SO4), Two metal plates are immersed (dipped) in the diluted sulphuric acid and connected to each other, one of them is copper (positive pole) and the other is zinc (negative pole). 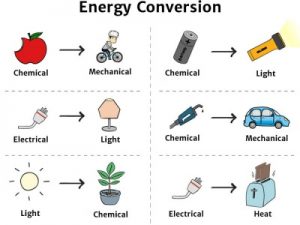 Transformation of energy in the electric lamp

In the electric lamp, electric energy changes into light energy & heat energy, The tools are a battery (dry electric cell), An electric lamp, connecting wires, and a switch, Connect the electric circuit, Close the circuit for one minute, then open it again, Touch the glass of the lamp with your hand, the lamp lights and becomes hot.

Using the batteries in the electric circuits to generate an electric current in the circuits, You should take care of touching the electric lamp in your house on lightening because it is very hot as electric energy is changed into heat and light energies.

You can use the following materials (An electric lamp, An electric bell, a battery, a switch and connecting wires) to set a tool to let a deaf friend have attention, also to set another tool for the same purpose for a friend who can’t see.

Transformation of energy inside the car

On operating a car engine, several transformations of energy take place in the car, the chemical energy stored in the fuel inside the car engine changes by burning into the thermal (heat) energy that changes into mechanical (kinetic) energy (to move the car), A part of it changes in the dynamo (generator) into electric energy.

Electric energy changes into ( light energy in car lamps, sound energy in the car radio cassette, heat energy in the electric heater of the car air conditioner), So, we deduce the law of conservation of energy: The energy is neither created nor destroyed, but it is converted from one form to another.

Using energy resources for many purposes, Changing energy from one form to another in some applications to be used in man’s life.

Examples of some technological applications:

Examples of some technological applications and their negative effects

The car engine is important to the car because in which the chemical energy stored in the fuel is changed by burning into heat energy which changes into mechanical energy causing the operation of the car, Car exhaust is considered from the negative effects of technological applications because it causes chemical pollution of air.

You must rationalize using chemical pesticides because they cause chemical pollution of water, air & soil, and cause cancer and food poisoning, Ecologists do not appreciate all the technological applications which are used in energy transformations because some of these applications have negative effects on the environment.