The ways of heat transfer through different media

We can get the heat through many ways such as the Sun and the friction, the Sun is the main source of energy on Earth , and it is considered the cleanest cheap source of energy.

The friction is a method to generate the heat as a principle of converting the kinetic energy ( the mechanical energy ) into the heat energy, The heat energy is a form of energy which is transferred from the object of higher temperature to that of the lower one.

The temperature is directly proportional to the particle kinetic energy, it is the condition which states the direction of the heat energy whether from or to the object when it comes in contact with another.

The ways of heat transfer 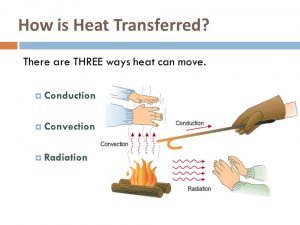 The transfer of heat by conduction

Good thermal conductors are also good at conducting electricity such as copper, silver, gold, and platinum, the cooking pans are made of copper and aluminum because they are good conductors of heat.

The transfer of heat by convection

The freezer of the fridge is found at the top of the fridge, when the air is cooled, its density increases, So, it falls down to cool the food in the refrigerator, while the hot air (of low density) rises up to be cooled again.

The electric heater is placed at the bottom of the room when the air (around the heater) is heated, its density decreases, So, it rises up to warm the room, while the cold air (of high density) falls down to be heated again.

The transfer of heat by radiation

Heat transfer by radiation is the energy transport due to emission of electromagnetic waves or photons from a surface or volume, The radiation does not require a heat transfer medium, and it can occur in a vacuum.

There is a space (vacuum) between the sun and the Earth, So the Sun‘s heat transfers by radiation only, and the heat is being carried from the fire to the man’s hands by radiation.

Heat therapy (Thermotherapy) & What are the clinical uses of heat?

Importance of heating in Agriculture, Horticulture and the greenhouse