The function and structure of the root system in the plant 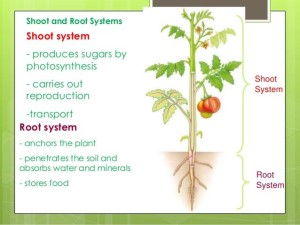 The plant takes carbon dioxide gas from the air, the light energy, the water from the soil, and the minerals salts from the soil (such as phosphorus, magnesium, calcium, nitrogen and zinc).

The structure of the root system

The root is subdivided and extended through the soil particles, it is composed of a number of the layers which are the epidermis layer, the cortex layer, the xylem (wood) layer and the pith layer.

The xylem (wood) layer follows the cortex layer, and the pith layer is the last layer that follows the xylem layer.

The functions of the root system

The root system is very important for the plant as it is branched and extended through the soil particles to fix the plant in the soil.

The root system covers a large area of the soil to search for the water and the mineral salts that the plant needs, then absorbs them from the soil by the root hairs, and raises them to the other parts of the plant (the shoot system) to form the plant’s food.

The root system absorbs the water and the minerals from the environment, It anchors the plant in the ground, and it stores the food that has been made in the leaves by the photosynthesis process, So, the food can be used later by the plant to grow and survive.

Transportation in plant, Structure & role of the plant stem in the process of transportation