Transportation in plant , Structure & role of the plant stem in the process of transportation

Each organism ingests what it needs of various substances by different means , There is no need for a specialized transport tissues in the primitive plants ( like algae ) , as the raw material ( CO2 , water and mineral salts ) and the products of photosynthesis move together from one cell to another by diffusion and active transport .

Gases ( oxygen and carbon dioxide ) move by diffusion , While water , mineral salts and soluble products of photosynthesis are transported by means of a specialized vascular tissues which are :

Xylem tissue ( vessels and tracheids ) translocates water and mineral salts that are absorbed from the soil through the root to the stem , then to the leaves where the photosynthesis process takes place .

Phloem tissue ( sieve tubes ) translocates the high-energy organic food substances ( carbohydrates , fats and proteins ) from sites of their production ( leaves ) to the sites of storage and consumption in the different tissues of plant ( roots , stems , fruits and seeds ) . 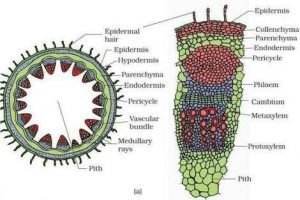 Structure of the plant stem

It consists of one row of adjacent and barrel shaped parenchyma cells , The outer walls are covered by a cuticle ( layer of cutin ) .

Collenchyma cells are several rows of cells which have thickened corners by the deposition of cellulose , They contain chloroplasts , They act as a mechanical tissue for the support of stem , They take part in photosynthesis ( in case of the presence of chloroplasts ) .

It occupies much space of the stem and consists of the following tissues :

Pericycle is a group of parenchyma cells alternates with the groups of fibers , Each group of fibers lies opposite to a vascular bundle from outside , It makes the stem strong and elastic .

Vascular bundles are arranged in a cylinder , Each bundle is triangular in shape with its base directed outwards , The Bundle consists of Phloem , Cambium & Xylem .

Phloem is the outer tissue of vascular bundle , It consists of sieve tubes , companion cells and phloem parenchyma cells , Function : transporting the organic food substances to all the plant parts .

Sieve tubes are elongated cells which contain cytoplasm without a nucleus , They are separated from each other by cross-walls which are performed by tiny pores through which the cytoplasmic strands extend from one tube to another , these cross-walls are called sieve plates .

Companion cells : Each sieve tube has a companion cell , They are living cells which contain a nucleus , ribosomes and mitochondria , So , they organize the vital functions of sieve tubed .

Xylem is the internal part of vascular bundle , It consists of vessels , tracheids and xylem parenchyma , It translocates water and solutes , It supports the stem , Vessels consist of tubes formed from vertical rows of elongated cylindrical cells that are joined end to end , Steps of their formation :

Numerous pits are scattered all over the vessel wall , where the primary wall is left without thickening , because these pits permit water to pass from inside the vessel to outside .

Lignin is laid down on the inner lining of vessel in the form of strands taking various forms such as annular and spiral , as it helps to support the vessel and prevent the collapse of its wall .

Tracheids are more or less similar to the vessels , except that they appear in T.S. in a pentagonal or hexagonal form , They are pitted and their ends are not opened , but pointed and closed .

In scientific references , it is mentioned that xylem parenchyma presents in rows of cells between the xylem vessels .

Medullary rays : parenchyma cells extending between the vascular bundles , They join the cortex with the pith .

Mechanism of the transport in higher plants , Theories explain the ascent of water in plant