Excretion in plants , Importance & types of transpiration for the plant

The plant makes transpiration , whereas the water vapour passes from the exposed parts of plant to the surrounding air and some of it condenses and forms drops , if you add the condensed liquid to anhydrous white copper sulphate , it becomes blue , confirming that the liquid is water .

Water is absorbed by roots , Water ascends through xylem tissue of the stem to the leaves and the water lost by transpiration generates a pull to raise water upwards , There is no specialized excretory system in plants , since the excretion in plants doesn’t cause any problem , this is for the following reasons :

It is the excretion of the water drops at the leaf tips of some plants in early morning in the spring , There is a special system for guttation which consists of one or many loose cells , opening by the water stomata called the hydathode which is opened permanently day and night , The water of guttation contains the other substances which can therefore be deposited , when the water evaporates rapidly . 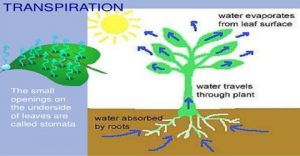 The mechanism of stomatal transpiration :

The loss of water in the form of water vapour through the lenticels , The amount of water lost by this method is very small , Lenticels are the openings that present in the cork layer of the trees’ stem .

We can conclude that great quantities of water are absorbed from the soil , mainly through the roots , water is then transferred through the conductive tissues to the stem and leaves , At the same time the plant loses most of this water in a continuous manner ( as mentioned earlier ) .

Importance of transpiration for the plant

A large amount of energy absorbed by the leaves is in the form of heat or is converted into heat inside the leaf tissues , This may cause a rise in the leaf temperature , especially in sunny and warm days , This rise in temperature harms the protoplasm and could lead to its death , So , the transpiration decreases the plant’s temperature through water loss .

Ascent of water and salts from the soil

The soil water enters the root cells by osmosis , because the root cells contain cell sap with a concentration ( of soluble organic and inorganic substances ) higher than that of the soil solution , The water moves from the root hairs to the inner root tissues , till it reaches the xylem vessels and tracheids by osmotic pressure .

As a result of the continuous loss of water from the mesophyll cells , their sap concentration increases , and so their ability to pull water upwards increases , This explains the transpiration cycle and its role in the ascent of water .

Osmotic pressure is only enough to move water through the plant stem for a short distance by what is known as root pressure, But the adhesion and cohesion theory explains the role of transpiration in water movement in a height reaching up to 125 meters in trees vessels.

Sensitivity in plants ( Tropism types , response to touch and darkness )