The plant tissue (as the epidermis tissue of the onion leaf) is composed of small units known as the plant cells, where each cell contains many components, The plant cell is the eukaryotic cell which differs in several key aspects from the cells of the other eukaryotic organisms. 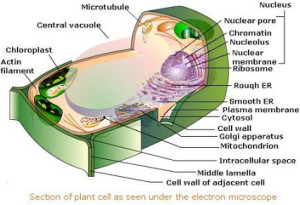 The plasma membrane is the membrane that surrounds the cytoplasm, and it controls the substances that enter or leave the cell.

The cytoplasm is a fluid that fills the cell and all the cell components are suspended in it, All the biological operations of the cell occur in the cytoplasm.

The nucleus organizes the biological operations in the cell and it is responsible for cell division.

The green plastids (the chloroplasts)

The chloroplasts are responsible for making food by the photosynthesis process.