Histology is a medical basic science dealing with the microscopic anatomy of cells, tissues, and organs, in order to correlate their structure with their function. The study of histology is dependent upon several tools, mainly the use of different types of microscopes to examine tissues and microtechniques which means the preparation of tissues to make them suitable for microscopic examination.

The cell is the smallest structural and functional unit capable of independent existence in all living organisms. The human body is composed of more than 200 different types of cells, however, all cells have a common basic structure.

Generally, the cell is formed of 2 major components: the nucleus and the cytoplasm. The cytoplasm is a dense fluid matrix, the cytosol and it contains the cell organelles and the cell inclusions. Each cell is bounded by the cell membrane, separating the cytoplasm from its extracellular environment.

It is a vital dynamic membrane that surrounds the cell. The presence of an intact cell membrane is essential to cell survival. 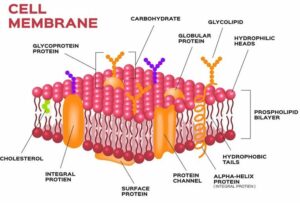 Molecular structure of the cell membrane

Molecular structure of the cell membrane

The cell membrane and almost all the membranes surrounding the membranous organelles have the same structure except for minor differences. These biological membranes consist mainly of the bimolecular layer of phospholipids in which specialized proteins are suspended in association with surface carbohydrates. Membrane phospholipids and the associated proteins are usually present in a 1:1 proportion by weight.

Lipid molecules of the cell membrane

Cholesterol: They are incorporated within the lipid bilayer. Membrane cholesterol molecules are responsible for the stability of the membrane components and regulation of membrane fluidity in body temperature.

Protein molecule of the cell membrane

The carbohydrate residues are present as glycoproteins and glycolipids of the cell membrane. They are always oriented towards the outside of the membrane with their branching saccharides extend some distance beyond the cell surface forming the cell coat or glycocalyx.

The glycocalyx of the plasma membrane varies from species to species and even from one cell type to another. The diversity of the molecules and their location on the cell’s surface enable membrane carbohydrates to function as markers that distinguish one cell from another.

The cell is responsible for

The trilaminar structure of the cell membrane seen in EM after fixation with osmium tetroxide is caused by the deposition of osmium on the hydrophilic heads of the phospholipid molecules resulting in two electron-dense lines, while the hydrophobic tails of the lipid molecules remain unstained resulting in the intervening pale zone. The cell coat is represented by the fuzzy material on the outer surface of the membrane.