The structure of the ovum 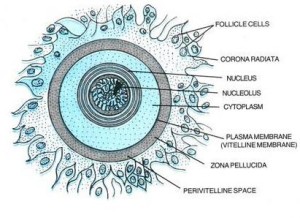 The ovum is not capable of active movement, and it is much larger than the sperms cells when the ovum joins with the sperms during the fertilization, and a diploid cell (the zygote) is formed, and the embryo is formed, which gradually grows into a new organism.

The ovum is a spherical cell and not mobile (static), It is one of the largest cells in the human body, it is visible to the naked eye without the aid of a microscope or other magnification device, and it is approximately 0.12 mm in diameter.

The ovum consists of the nucleus, the cytoplasm and the cellular membrane (that surrounds the cell from outside), The nucleus contains one-half of the genetic materials (the chromosomes), and the cytoplasm stores the food and the nutrients.

The function of the ovum

The function of the ovum is to carry the set of chromosomes contributed by the female and it creates the right environment to enable the fertilization by the sperm.

The ova provide the nutrients for the growing embryo until it sinks into the uterus and the placenta takes over.

The ovum (egg cell) in the animals and the plants

The ovary produces the ovum (the egg cell) which is the gametes (sexual reproductive cells) in the animals and the plants.

The ovum is large in size because it stores the nutrients, it is produced in few numbers and it is not mobile (static), It contains half the number of chromosomes that are found in female body cells.