Some animals use echoes to locate and identify the objects, The echolocation is used for navigation and for foraging (hunting) in various environments, The bats can use the phenomenon of sound reflection (echo) in their daily life to locate the position of their preys, and fly in the dark without colliding with anything.

The bats transmit ultrasonic waves of frequencies (50: 100 kHz) that reflect on the surfaces and barriers then receive them back after reflection, and locate their positions, so they avoid colliding them.

The bats generate ultrasonic waves via the larynx and emit the sound through the open mouth or the nose, The bats make high pitched chirps which are too high for humans to hear, the bats identify the location of objects by the echolocation. 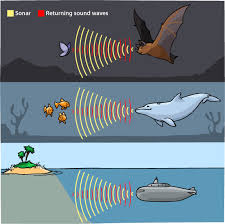 The bats use the echolocation to find their food and their way, So they can determine the direction of an object, how far it is, how fast it is, and how big the objects are by making sharp clicking and chirping sounds through their mouth and nose.

The dolphins are able to produce intense, short, broadband pulses of ultrasonic sound (clicks), they use short pulses and high frequencies using clicking and whistles which sent out of an opening below their blowhole.