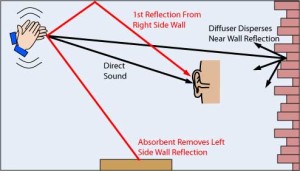 We must know the importance of echo in our life, There are many applications of echo in different fields whether scientific, technical or medical such as determination of the speed of sound through the air and the concentration of sound.

The echo is used in the determination of sea depth and fish shoals, detecting the industrial defects, locating the position of surfaces and barriers, and it is used in the medical diagnosis.

The concentration of the sound 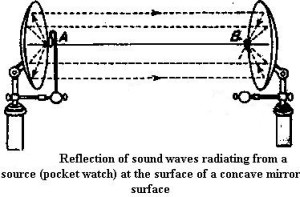 Sound reflection on the concave surface.

When the sound waves fall on a concave surface, the reflected sound waves will be collected at a point known as the focal centre ( focus ) of this surface.

It is possible to determine the positions and the dimensions of concave surfaces then direct the reflected sound waves on definite directions to make the sound more clear and to increase its intensity.

These places are supplied by concave walls and ceilings to concentrate the reflected sound and make the sound more clear and more intense.

The voice of Imam can be heard clearly in all parts of large mosques without using the microphones because the surfaces of large mosques are concave which concentrate the reflected sound waves and make the sound more clear and more intense.

Fennec fox has large and concave ear pinna that concentrate the reflected sound and make it more clear and more intense, The hearing of Fennec fox is sensitive enough to hear prey moving underground.

Determination of sea depth and fish shoals by echo