Determination of sea depth and fish shoals by echo 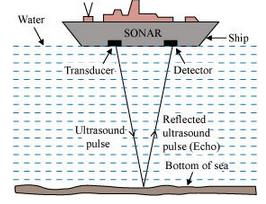 The sonar device is used on the ships to find the position of the sea bed, It is used to detect the sunken wrecks or the submarines and it is used to find the shoals of fish.

The sonar device sends out a sound and automatically calculates the distance of an object and the submarines use the sonar to find the objects under the water.

Ultrasonic waves of frequencies higher than 20000 Hz are used for estimating the depth of the seas and exploring the fish gathering in the seas.

Two devices are fixed at the bottom of the ship which are the sonar device that produces ultrasonic waves, and a hydrophone set which receives the reflected waves from the seabed or the fish shoals.

Ultrasonic waves can be used by fishing boats to find the fish as the shoal of fish between the boat and the seafloor will return the echo more quickly.